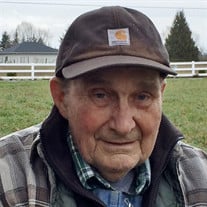 John Frank Vardanega passed away on January 4, 2019 in Warren, Oregon just one month, to the day, shy of his 93rd birthday. John was born in Warren on February 4, 1926 to Giuseppe (Joe) and Teresa (Bowers) Vardanega, he was the fourth of five children, raised on the family dairy farm. John graduated from Scappoose High School in 1944, and immediately reported to Fort Lewis for two years of service in the Army. Prior to his enlistment, he had driven bus for the Scappoose School District, and it was on this job where he met his future wife, Gene Schuring. His plan was simple; he just ensured that one day she was his last stop so he could ask her out. From 1944 to 1946 he served in the Army during WWII as a Sergeant in the 1641st Engineering Utility Detail. He worked as a clerk typist until there was need for heavy equipment operators. The army decided his experience driving farm equipment qualified. He was reassigned overseas to aid in the post war cleanup effort, becoming an expert heavy equipment operator. He served there in England, France, Belgium and Germany. Upon his return home, he rekindled his romance with Gene and they married on May 24, 1947. John worked first on the Parker Ranch in Scappoose. Through his connection with Charles Parker, he moved into working for the Parker-Schram Construction Company, which owned and operated Scappoose Sand and Gravel. He later joined Rogers Construction Company, and was involved with highway and road construction, including such projects as Highway 26 over Mount Hood, but mainly with the ongoing construction of I-80N, now known as Interstate 84 from Portland to Mountain Home, Idaho. John enjoyed this work tremendously, but ultimately returned to take a position with Scappoose Sand & Gravel to be closer to home and family. He rose to the rank of Superintendent before his retirement at age 55. He and his wife, Gene, had always had a farm of some type. After his retirement, he began hay farming as a full time job, and remained engaged in this business through most of the rest of his life. It was through this business that he became well known throughout Columbia County. In addition to farming, John was active in the community as a member of the Columbia County Farm Bureau, the Columbia County Comprehensive Planning and Advisory Committee (CPAC) and the Columbia SWCD (Soil and Water Conservation District). John was preceded in death by his wife of 63 years, Gene (Schuring) Vardanega, his parents, Joe and Teresa Vardanega; his brothers, Roy and Frank; his sisters, Clara (Downing) and Joy (Johnson). John is survived by his children, Barbara (Jay Thomas) Vardanega of Portland, John (Joan Fishback) Vardanega of Warren, Lorelie (Raj Paonaskar) Vardanega of Portland and Josie (Fred) Gilmore of Herndon, Virginia; his grandchildren, Jacob and Jenny Vardanega, Jordan Gilmore, Josha and Asa Paonaskar; and his companion since his wife’s death in 2010, Selma Pickle. Funeral services will be held at Columbia Funeral Home in St. Helens, OR on January 16, 2019 at 1pm. Per John’s wishes, a short viewing will be held directly after the service, followed by interment at Bethany Cemetery in Warren with military honors.

John Frank Vardanega passed away on January 4, 2019 in Warren, Oregon just one month, to the day, shy of his 93rd birthday. John was born in Warren on February 4, 1926 to Giuseppe (Joe) and Teresa (Bowers) Vardanega, he was the fourth of five... View Obituary & Service Information

The family of John Frank Vardanega created this Life Tributes page to make it easy to share your memories.

Send flowers to the Vardanega family.