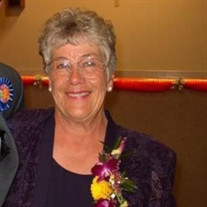 Joyce F Jones passed away peacefully at home on October 9, 2021, in Scappoose. Her husband of 68 years Richard was by her side. Joyce was born on September 30, 1936, in Cairo, Oklahoma. Her grandmother Belle Gentry helped bring her into this world. Her parents traveled looking for work in places like Louisiana, Texas, Arkansas, Nevada before arriving in Oregon, originally in Guilds Lake in Portland where her dad became employed at Oregon Steel Mills. Joyce arrived in Scappoose at age 13 in time for 8th grade. She and Richard made Scappoose their home for life. Joyce was a very proud member of Scappoose High School class of 1954. She so enjoyed class reunions and keeping up with her classmates through the years. While raising her children, Joyce worked at Johnson V Store in Scappoose, Scappoose School District as well as Coca Cola and Rose Heating co. Joyce enjoyed many activities including quilting, crocheting, ceramics, cake decorating, home decorating, and cooking. But her true passion was family. Becoming a grandmother at age 41 and enjoying being close to her 12 grandchildren was the joy of her life. Richard and Joyce built their home on the Jones Homestead in Scappoose which later became Heartacres. They were able to enjoy a retirement of 28 years with many winters in Mesa, AZ with friends and family. Joyce is survived by her husband of 68 years, Richard Jones, her one true love, marrying on Valentine’s Day 1953. Three children, Karen Brock (Butch), Rick Jones, Becky Jones (Glenna). Her dozen roses, grandchildren Cassidy Harper, Kate Fox, Weston Brock, Nicole Jones, Joel Wagner, Cody McCullar, Will Jones, Jarrod Brock, Jake Gentry, Ty Jones, Seth Brock and Darren Brock as well as 19 (and counting) great grandchildren. In addition, brother Calvin McCullar and sister Dolores as well as many nieces and nephews whom she loved dearly. Joyce is also survived by her dear friend Ruth Trtek of Scappoose. Joyce is proceeded in death by her parents Roy & Lena McCullar, brothers Dale & Jimmie and all 8 of Richards siblings who became family to Joyce. Services will be held Monday, October 25th at 2:00 p.m. at Columbia Funeral Home in St. Helens. Interment follows at Fairview Cemetery in Scappoose.

Joyce F Jones passed away peacefully at home on October 9, 2021, in Scappoose. Her husband of 68 years Richard was by her side. Joyce was born on September 30, 1936, in Cairo, Oklahoma. Her grandmother Belle Gentry helped bring her into this... View Obituary & Service Information

The family of Joyce F. Jones created this Life Tributes page to make it easy to share your memories.

Send flowers to the Jones family.