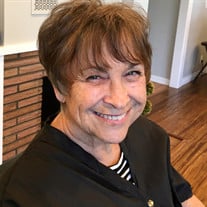 On January 16, 2020, at 12:12 p.m., JUDYE LYNN RAWLINGS took her last breath and passed into the arms of God at Hospice of the Valley in Scottsdale, Arizona. At the time of her death Judye was surrounded by her husband, two daughters, and her dog, Odie. Judye was born on July 22, 1948, in Jonesboro, Arkansas, to Norman Travis Maiden and Jewell Elizabeth Maiden. She attended elementary school and high school in Bay, Arkansas, graduating from Bay High School in 1966. After graduation she attended Arkansas State University in Jonesboro. After working briefly in Memphis, Tennessee, she attended school in Miami, Florida, and became a flight attendant for Eastern Airlines. As a flight attendant she was able to travel extensively as well as meet friends that would last a lifetime. After graduating from flight attendant school Judye was based in Atlanta, Georgia, where she was to meet the love of her life, Bill Rawlings, on June 11, 1970. The couple was married in Bay, Arkansas, on October 10, 1970. With weekend commuting between Portland and Atlanta by both parties becoming too stressful, Judye gave up her job with Eastern and the couple settled in Oregon City, Oregon. The couple moved to St. Helens, Oregon, in 1972. In St. Helens, Judye worked a number of years as a travel agent with Sunburst Travel. It was here that she was able to meet and greet many residents of the community with her beautiful, friendly smile for which she will be long remembered. Judye’s interests included, but were not limited to, shopping, decorating, going to movies, visiting with family, grandchildren & friends, playing video poker, attending University of Michigan baseball games, and spending time with husband, Bill, and dog, Odie. Judye is survived by husband, Bill, of Scottsdale, Arizona; daughters Marnie Weiss of Portland, Oregon, and Amanda Wilcox of Scottsdale, Arizona; grandchildren, Karsyn Weiss, of Eugene, Oregon, Willie Weiss of Ann Arbor, Michigan, Payton Wilcox of Scottsdale, Arizona and Sophie Prosser of Portland, Oregon. She was preceded in death by her parents, Norman and Jewell Maiden and sisters Norma Jean Mangum and Tammy Lynn Barnhill. A memorial service will be held at Warren Fellowship Community Church in Warren, Oregon, on February 7, 2020, at 2:00 PM, with a reception to follow. After the reception all are welcome to a gathering at St. Helens Elks Lodge at 350 Belton Road in St. Helens. In lieu of flowers the family asks for donations to be made to the American Stroke Association, a division of the American Heart Association. Please sign our online guestbook at www.columbiafh.com

On January 16, 2020, at 12:12 p.m., JUDYE LYNN RAWLINGS took her last breath and passed into the arms of God at Hospice of the Valley in Scottsdale, Arizona. At the time of her death Judye was surrounded by her husband, two daughters, and her... View Obituary & Service Information

The family of Judye Lynn Rawlings created this Life Tributes page to make it easy to share your memories.

Send flowers to the Rawlings family.