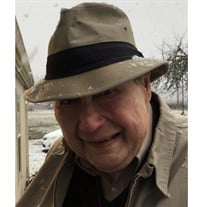 Early Monday morning, September 16, 2019, Kenneth Charles Tipps, loving husband and father passed away at the age of 87 at his home in Scappoose, Oregon. Ken was born March 22, 1932 in Running Water, Texas to Charles Edward and Lola Dell Tipps. He married Joyce Johnson in 1953 and together they enjoyed 66 years of marriage. Their family includes six children, their spouses, 14 grandchildren and 8 great grandchildren. He proudly served his country in the Air Force serving in Germany post World War 2, for eighteen months. One of his greatest accomplishments was the 50 plus years he dedicated to serving the Lord through his work as an elder, minister and a missionary. Ken had a special passion and love for the people of Cameroon, Africa. Several lifelong bonds were formed during his 10 trips there as is evidenced by his African namesakes. Ken moved his family to Scappoose in 1984 where he served as a minister for the Scappoose Church of Christ. He planted deep roots in this community and called it home for the last 35 years of his life. After retiring from the ministry, Ken again served his country as one of the first TSA agents. During his time in this role, he was recognized on multiple occasions for the difference he made in the lives of those he encountered. He is survived by his wife, Joyce Tipps of Scappoose; his children, Mike and K’Lynn Tipps of West Richland, Washington, Cindy and Kevin Lindquist of Lawrenceville, Georgia; Shirley and Dave Ekstrom of Vancouver, Washington; Kendra and Scott Koopman of Richland, Washington, Terry and Roger Palmer of Portland, Oregon and Holly Rawdon of Portland, Oregon; 14 grandchildren, 8 great grandchildren. His brothers, Floyd Tipps of Redosa, New Mexico; Bob Tipps of Levelland, Texas and Ross Tipps of Calhoun, Georgia. A celebration of life will be held Friday, September 20, 2019 at 1:00 PM at Scappoose Church of Christ.

The family of Kenneth Charles Tipps created this Life Tributes page to make it easy to share your memories.

Send flowers to the Tipps family.