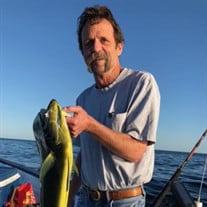 Larry Lee Barker was born on November 5, 1956, in Torrance, California. He passed away on June 27, 2021, at Providence St. Vincent’s hospital in Portland, Oregon. Larry was 64 years old. Larry and his wife of 42 years, Cheryl, raised their three children in Scappoose, Oregon. He tried his hand at several different careers but found construction to be his calling. He started his own construction company called Barker Construction. Outside of working, Larry enjoyed hunting and fishing. Once the children were grown up and on their own, Larry and Cheryl moved to Prineville, Oregon, bringing his construction business with them. After about 16 years in Prineville, Larry and Cheryl decided to move back to Scappoose. In 2016, Larry was diagnosed with lung cancer. Even though he went through surgeries, radiation, and chemotherapy, he kept working. A year later, he was diagnosed with a more aggressive form of lung cancer. He attacked it with immunotherapy and achieved great results. He then decided to try a clinical trial medication and another round of chemo treatment. Larry took a lot of pride in his work. He continued to work right up to the middle of June 2021 to finish his last job, and he did. Larry is survived by his wife, Cheryl Barker; his daughter, Lyndsey Clarke; his son, Charles Barker; his stepson, Steve Proitte; his sister, Jeannie Romine; and his eight grandchildren. A celebration of life will be announced at a later date.

Larry Lee Barker was born on November 5, 1956, in Torrance, California. He passed away on June 27, 2021, at Providence St. Vincent&#8217;s hospital in Portland, Oregon. Larry was 64 years old. Larry and his wife of 42 years, Cheryl, raised... View Obituary & Service Information

The family of Larry Lee Barker created this Life Tributes page to make it easy to share your memories.

Send flowers to the Barker family.