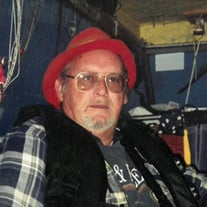 Larry LeRoy Gardner Sr. moved to Heaven Wednesday, November 4, 2020 in the early morning hours at Seaside Providence Hospital with his daughter, Michelle Sparks, by his side. He was 73 years old. Larry had been living with many health issues, but melanoma cancer was the straw that finally broke the camel’s back. Larry was born April 8, 1947 in Bellingham, WA to Mr. Roy and Jacqueline Gardner, both of Bellingham, WA and deceased. He was the oldest of his five siblings. After graduating from Lake Quinalt High School in 1965, he joined the USAF. He served our country during the Vietnam War and was honorably discharged from Kasler AFB, MS after completing his training for Radio Relay Equipment Repairman in 1980. Upon returning home, he worked as a lead man at Crown Zellerbach until they closed down and then retired from Boise Cascade in St. Helens, OR working in the Environmental Department. Larry had two sons, Larry Gardner Jr., deceased, of McMinnville and Steven Gardner, Scappoose, with his first wife, Donna Nelson. In 1975, while working at Crown Zellerbach, he met and fell in love with Renee Broderick, the love of his life. Together, they had two daughters, Jamie Madden of Florida and Michelle Sparks, Scappoose. They remained married until Renee’s death in 2010. Larry worked hard and played hard. He always provided for his family. He also loved helping people and would give anybody the shirt off his back. He loved sports and coached both girls and boys youth basketball for many years. He loved to bowl at the Lanes, go golfing, and was a member of AA and the VFW. And he absolutely loved to go fishing. Being a Grandpa filled his final days. Larry is survived by siblings Terry Gardner of Arkansas; Judy Talmadge of Amity; Mike Gardner of Portland; Damen Gardner of Scappoose; and his three children: Steven, Jamie and Michelle and eight grandchildren. A celebration of life will be held at a later date at Columbia Funeral Home in St. Helens, OR. Please sign our online guestbook at www.columbiafh.com.

Larry LeRoy Gardner Sr. moved to Heaven Wednesday, November 4, 2020 in the early morning hours at Seaside Providence Hospital with his daughter, Michelle Sparks, by his side. He was 73 years old. Larry had been living with many health issues,... View Obituary & Service Information

The family of Larry LeRoy Gardner created this Life Tributes page to make it easy to share your memories.

Send flowers to the Gardner family.