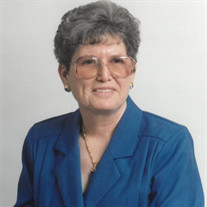 Lila Maye Brass went home to be with her Lord and savior Jesus Christ surrounded by family at the Thanksgiving House in St. Helen Oregon on Oct. 12th 2018 at the age of 83. She was born November 28th 1934 to TD Kent and Geneva Pearl Kent in Norman, Arkansas. They moved to North Plains Oregon when she was a child and was raised on a farm on Pumpkin Ridge with her eight siblings. Lila married Donald R. Coddington in Nov. 1952. They had 3 sons Steve, Mike and Tim. Don preceded her in death in Nov, 1991. She married Nigel H. Brass in Aug, 1993. He preceded her in death in April 2014. She was preceded in death by her parents, 3 brothers- Junior Kent, Hobert Kent and T Kent a daughter in law Crystal Coddington (Tim) and grandson Donald O. Coddington (Kathy). Lila is survived by sons - Steve Coddington (Pamala), Mike Coddington, and Tim Coddington- sisters - Mary Roberts, Betty Jackson and Charlene Dodson (Tom) and sister in law Divina Kent, brothers – Jim Kent (Bobbie), John Kent (Rossie) -grandchildren- Jessica Leader (Donny), Angela Hughes (Torrie),Brandon Coddington (Jacqueline), Mandy Coddington, Dusti Coddington, Kevin Coddington (Nancy), Kathy Coddington, Jason Coddington, Daniel Coddington, and Alan Coddington (Stephanie). She has 25 great grandchildren and 1 great-great granddaughter. She is also survived by numerous nieces and nephews. Lila worked for a number of years as a nurses’ aide at the Columbia District Hospital in St. Helens. She lived on a houseboat in Scappoose at Dikeside Moorage from 1977 to 2005. Her family and friends were blessed by her hospitality as many barbeques and family reunions were held there. She loved her family. She was a devoted wife, mother, grandmother, sister, daughter, friend, and a great example of the love of Christ throughout her life. Health issues forced her to move from the houseboat and the last 3 years of her life were spent at the Thanksgiving House (a residential care facility) in St. Helens due to Parkinson’s complications. Thank you to all the staff there for their love and care for Lila. She was a member of the Church of Christ in Scappoose but in recent years here health prevented her from attending services. At Lila’s request no services will be held. The family will have a private gathering.

Lila Maye Brass went home to be with her Lord and savior Jesus Christ surrounded by family at the Thanksgiving House in St. Helen Oregon on Oct. 12th 2018 at the age of 83. She was born November 28th 1934 to TD Kent and Geneva Pearl Kent in... View Obituary & Service Information

The family of Lila Maye Brass created this Life Tributes page to make it easy to share your memories.

Lila Maye Brass went home to be with her Lord and savior Jesus...

Send flowers to the Brass family.