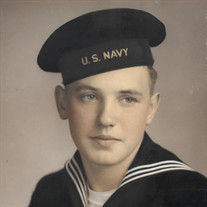 Lloyd Helgerson March 4, 1927- February 4, 2018 Our beloved Lloyd was born in McGregor, Iowa, a town on the Mississippi River. His family moved to the Pacific Northwest and he attended grade school in Kelso. He commuted to Kelso for Junior High and High School and was fortunate enough to meet Velma on the school bus as she traveled to her eighth-grade class in Rose Valley. At 17, Lloyd stretched his age and enlisted in the Navy. He served from 3/8/44- 5/20/46 and spent the war on a destroyer (the USS Harrison) in the Pacific. His ship was involved in taking the Philippines, Iwo Jima, Okinawa, and Japan itself. It survived a gigantic typhoon and an enemy hit. Because of Lloyd’s tenacity, and two very large bombs, Japan eventually surrendered. After leaving the service, Lloyd married Velma on September 10, 1946. They had to promise her father that they wouldn’t have children until they were in their 20’s. Roger was born in 1950, Susan in 1951, and Janice in 1953. Lloyd stayed connected with shipmates and attended several reunions. He traveled twice to visit the WWII memorial in Washington D.C. Lloyd worked as a lathe operator for much of his adult life. This led him and his family to live in Astoria, Longview, and Scappoose near plywood mills. After the Multnomah Plywood mill closed, Lloyd took on a number of jobs, including church janitor. He and Velma also helped administer Warren Community Fellowship’s benevolence program for many years and managed the park they called home for 10 years. For recreation, Lloyd loved golf, riding his motorcycle, and reading western novels. As RV campers, he and Velma traveled the country with friends. They sprouted wings and became snow birds during the winters of ’94,’95, and ’96. Lloyd breathed his last at his home in Columbia City and crossed the finish line, triumphant. Lloyd was preceded in death by his son Roger and his daughter Susan. His wife of 71 years, Velma, and his daughter Janice will miss him, but rejoice in his home going. A Memorial Service will be held at Warren Community Fellowship on Saturday, February 24, 2018, at 1:00pm

Lloyd Helgerson March 4, 1927- February 4, 2018 Our beloved Lloyd was born in McGregor, Iowa, a town on the Mississippi River. His family moved to the Pacific Northwest and he attended grade school in Kelso. He commuted to Kelso for Junior... View Obituary & Service Information

The family of Lloyd Merle Helgerson created this Life Tributes page to make it easy to share your memories.

Send flowers to the Helgerson family.