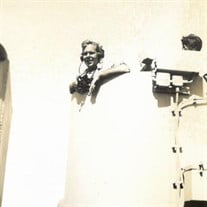 Martin Louis Scheer, age 94, passed away peacefully on July 1, 2020 in the presence of family and loved ones. He was born to Martin and Veronica Scheer on June 22nd, 1926 in Eau Claire, Wisconsin. Martin spent his childhood days hunting and fishing with his younger brother George and pestering his older sister Emma, as young boys can do. He served in World War II as a Gunners Mate on Liberty ships with the US Navy. Upon turning 18, his brother George joined the Navy to serve along side Martin; they served together aboard the USS Pit River. In 1948, Martin moved to St. Helens, Oregon. He married Rose Daniels in 1949 and had two children. In April 1959, he remarried to Annabelle Manning, a widow with two children, and had another child. Martin enjoyed a 43 year career at the local paper mill before retiring in 1992. Martin had many outdoor hobbies. He was an avid hunter, enjoying spending time deer, elk, and waterfowl hunting. He also enjoyed spending time on the river fishing and could often be found in his green Bayliner Liberty. In his younger years, he was active in the Rebel Radio club and Columbia County REACT. In his later days, Martin enjoyed watching his grandchildren play baseball and softball, going to church, watching looney tunes, and gardening. He was still able to go out to hunt and fish with the help from his son Marty and grandsons Martin, Michael, and Drew, even up to the week before he passed away. Martin is survived by his wife Annabelle; children Terry Scheer, Vicki ONeal-Hynes, Mary Ellen Minyard, Vernon Jacobs, Martin Scheer; many grandchildren, great-grandchildren, and great-great grandchildren. Martin will be laid to rest at Willamette National Cemetery with military honors in a private service. A celebration of life will be planned for a later date. In lieu of flowers, his family requests you make a donation to St. Frederic Catholic Church in St. Helens, St. Jude Children’s Research Hospital, or Disabled American Veterans.

Martin Louis Scheer, age 94, passed away peacefully on July 1, 2020 in the presence of family and loved ones. He was born to Martin and Veronica Scheer on June 22nd, 1926 in Eau Claire, Wisconsin. Martin spent his childhood days hunting and... View Obituary & Service Information

The family of Martin Louis Scheer created this Life Tributes page to make it easy to share your memories.

Send flowers to the Scheer family.