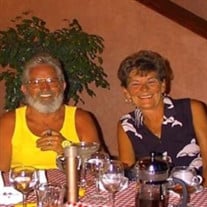 Nancy Friend was born May 13, 1942 to Richard and Ruth Simmons. She was born and raised in Grays Harbor, WA. Nancy had the wanderlust; she was always on the go; across the country and out of the country. She is described by family and friends as a free spirit and had an adventurous soul. Nancy had several occupations, from beautician to car sales, to bartender. She was most remembered for working several years at Longfellows Inn, in Scappoose, Oregon. Nancy gave birth to two children: Renae on July 30th, 1960 and then Jerry exactly 10 years later, on July 30, 1970. She settled down in Columbia County in 1972 with the Trojan Nuclear Power Plant families and lived there until 2000 when she found her new home in San Felipe, Baja, Mexico. Nancy found and married the final love of her life, Edgar Friend, on May 13th, 1989. On their 25th wedding anniversary they traveled to Costa Rica. On August 23rd, 2014, Ed passed away and Nancy was devastated, but continued to live surrounded by their friends in San Felipe, until November 2020 when her daughter brought her home to Oregon. In San Felipe, Nancy was a member of the Club Las Amigas, a non-profit organization focused on furthering the education of local Mexican children who desire to achieve their fullest potential but need financial help to do so. She loved participating in the annual Toy Drive each Christmas. She also belonged to a women’s group called The Yacht Club. Nancy is preceded in death by her parents, her husband, Edgar Friend, and her brother, Patrick Simmons. She leaves behind her brother, Dick Simmons; her sister, Meredith Williamson; her children, Renae Kowaleski and Jerry Reid; her grandchildren, Teresa Albright, Shawn-Michael Moffett, Courtney Reid and Austin Reid; her great-grandchild, Brooke Albright; her step-children, Danny and Jim Friend, Patty Toney and Richard Powell and step-grandchildren, Kody Kay, Justin and Jaden Friend, Kayla Trost and Allen Toney. In lieu of flowers, please consider making a donation to the following non-profits which were near and dear to Nancy’s heart: The Lymphoma and Leukemia Society (https://www.lls.org/pacnw) and the National Multiple Sclerosis Society (https://www.nationalmssociety.org). Please sign our online guestbook at www.columbiafh.com.

Nancy Friend was born May 13, 1942 to Richard and Ruth Simmons. She was born and raised in Grays Harbor, WA. Nancy had the wanderlust; she was always on the go; across the country and out of the country. She is described by family and friends... View Obituary & Service Information

The family of Nancy Eileen Friend created this Life Tributes page to make it easy to share your memories.

Send flowers to the Friend family.