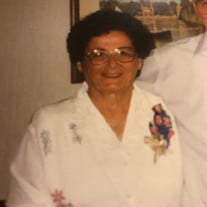 Nona Burgess passed peacefully at the age of 90 on November 21, 2019 in Vancouver, Washington. She was born in Portland, Oregon on May 1, 1929 to John and Krieda Hiekkla. She attended and graduated from St. Helens High School and married her husband James on June 1, 1947 at the age of 18. Nona and James lived in various other places in Oregon, including Vernonia, Empire and Salem, but they always came back to St. Helens. Nona performed several jobs in her life: she worked in a box factory, a candle factory, collected pinecones and cedar with her husband and children, and was a homemaker. In her younger years she loved to travel and camp, and later in life she enjoyed reading her Agatha Christie books, the Bible, and going to second-hand stores and getting a good deal. Nona loved and was loved by her dogs, Frannie, Jody and Maggie. Some thoughtful memories of Nona are when she first learned to drive stick shift, her husband had an old purple Hudson he allowed her to drive. While she was practicing, every time she would go forward, she would run into this telephone pole. When she would try to back up and shift, she would run into it again. Eventually she had to walk back to the house as she could never get it out without hitting the telephone pole. Finally, James would have to go back down to get the car for her. Another memory is when Nona and her family were camping and there were bears getting into the food. Nona handed James a baseball bat and told him to go chase the bears away, and he said, “If you want to chase the bears, you can take the baseball bat.” Before Nona’s passing, she suffered the loss of her husband James Burgess, her parents John and Krieda, her sons John and Robert (Bob) Burgess, her brother Jack Hiekkla, and her sisters Lois, Irene, Corkie and Jane. Nona’s surviving family includes her son Mark Burgess and daughter Sandi Wilson, her grandchildren Kami, Dan, Chris, Jessica, and Lynetta, several great-grandchildren and great-great grandchildren, and several nieces and nephews. There will be a graveside service held in Nona’s honor Saturday, November 30, 2019 at 10:00 am at Yankton Cemetery, officiated by Mike Kernutt, with a reception being held at Sunset Park Church from 11:00 am to 1:00 pm. Please sign our online guestbook at www.columbiafh.com

Nona Burgess passed peacefully at the age of 90 on November 21, 2019 in Vancouver, Washington. She was born in Portland, Oregon on May 1, 1929 to John and Krieda Hiekkla. She attended and graduated from St. Helens High School and married her... View Obituary & Service Information

The family of Nona Mable Burgess created this Life Tributes page to make it easy to share your memories.

Nona Burgess passed peacefully at the age of 90 on November 21,...

Send flowers to the Burgess family.