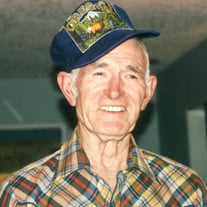 Norman “Mannie” Baer, 88, of Goble died at home on December 7, 2019. He was born November 15, 1931, in Cincinnati, Arkansas to Roy and Alma (Randolph) Baer. In 1950 he graduated from Siloam Springs High School where he studied agriculture. He had been a Columbia County resident since moving to Oregon in 1952. Norman worked in area paper mills for 43 years. In retirement he worked for the St. Helens Chronicle delivering newspapers and kept busy tending the farm and writing his memoir, Riding on the Wind. He enjoyed square and round dancing and was a longtime member of dance clubs such as the Rough And Ruffles, Stardust Dancers, Ring and Swing, R Square D, and Fireballs. He was a member of the Church of Jesus Christ of Latter-day Saints. Norman was preceded in death by his wife of 32 years, Evelyn Rosebeary. He married Barbara Ade January 11, 1986. She survives him at home. He also is survived by a daughter, Myrna (& Charles) Rak of Longview, two sons, Gregory (& Lori) Baer of Camas and Douglas (& Rachel) Baer of Dallas, OR; step-children, Carol Wilson of St. Helens, Debra Cumberland of Graham, WA, Wendy Jones of Tacoma, Stephen Ade of St. Helens, and David Ade of Goble; brothers Doyle Baer of St. Helens, and Max Baer of Columbia City, and a sister, Iva Sykes of Kelso; as well as 20+ grandchildren and 10+ great-grandchildren. A graveside service is scheduled for 1 p.m. on Saturday, December 14, 2019, at Bayview Cemetery in Warren. All are welcome to attend and celebrate Norman’s life. In leau of flowers, donations can be sent to St. Helens Senior Center.

The family of Norman "Mannie" Arnold Baer created this Life Tributes page to make it easy to share your memories.

Send flowers to the Baer family.