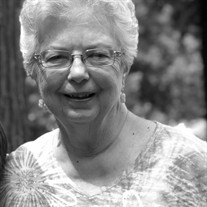 Pat Ann Hughson (Sibley), 80, of Clatskanie, Oregon died Tuesday, June 8th at 5:01 AM with her husband Richard and daughter Lesley at her side. Pat was born on May 20, 1941, to Ralph & Carmalita Cummings in Sheridan, OR. She then went to live with Leslie & Rena Sibley at age 3 after Carmalita’s death. She was legally adopted by the Sibley’s at age 9. Also surviving Pat are son Christopher and wife Suzanne of Avondale, Pennsylvania; grandchildren Conner, Keaton, Alexandra and Richard; Lesley’s husband Jim; sisters Helen Anderson & Marion Carpine; and several nieces and nephews with whom she had remained close. Pat was raised by the Sibley’s in St. Helens, Oregon where she graduated from St. Helens High School in 1959. She attended one year at Pacific Lutheran University and returned to St. Helens to work at Dean’s Market and the St. Helens Hospital. Pat and Richard were married July 10, 1965. They moved to Clatskanie from St. Helens in 1967 and she began working at Crown Zellerbach, Wauna Mill until the birth of her daughter in 1969. Upon settling in Clatskanie, Pat became involved in several community organizations until her death. Her contributions to the community were numerous and included being a founding member of Faith Lutheran Church, participation in Friends of the Library, Past President of the Clatskanie Garden Club, Rainy Days Quilters, and service to several other local organizations. Pat enjoyed the Oregon coast, traveling in the US and abroad, baking great pies, spending quality time with family and friends and was a 1970’s legend when it came to Jell-O desserts. A memorial service will be held Thursday, June 24th at 2 pm at Clatskanie City Park. Cremation has taken place and she now rests at Columbia Memorial Gardens, in Scappoose, Oregon. Donations can be made in Pat’s memory to Lutheran World Relief www.lwr.org or the American Cancer Society www.cancer.org. She was loved by many and will be missed greatly. Please sign our online guestbook at www.columbiafh.com.

Pat Ann Hughson (Sibley), 80, of Clatskanie, Oregon died Tuesday, June 8th at 5:01 AM with her husband Richard and daughter Lesley at her side. Pat was born on May 20, 1941, to Ralph & Carmalita Cummings in Sheridan, OR. She then went to live... View Obituary & Service Information

The family of Pat Ann Hughson created this Life Tributes page to make it easy to share your memories.

Send flowers to the Hughson family.