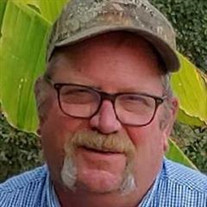 Patrick “Pat” J. Schenk, 60, of Deer Island, OR, died unexpectedly on Friday, July 24, 2020. Pat was born to William C. and Margaret (Malloy) Schenk in Pennsylvania. He grew up in Anderson, South Carolina and Toledo, Ohio. He was a 1979 graduate of Southview High School. After high school, Pat decided to move west and settled in St. Helens, OR. This is where he met his wife, Jeannie (Bartlett). They married July 1985 and together they found their dream home and made a life together in Deer Island, OR. Pat’s passion was his family and his farm. He had a love for life and lived everyday to the fullest. In his lifetime Pat was a cowboy, logger, rancher and farmer, but what Pat loved the most was being husband, dad and grandpa. Pat was a cancer survivor and made the most of every day. Throughout his life Pat gathered a wealth of friends, many of whom he kept in contact with, from childhood friends and high school teachers to former coworkers. Pat left an impression wherever he went, his sense of humor and positive outlook were his trademarks. Pat was preceded in death by his father, William C. Schenk. Survivors include his wife, Jeannie Schenk of Deer Island, OR; daughter, Jennifer (Alex) Hotze of Montrose, CO; son, Trever (Heather) Schenk of Columbia City, OR; grandson, Calvin Hotze, of Montrose, CO; mother, Margaret Schenk; brother, William (Mary Beth) Schenk; sister, Christina Cox (Lester); sister, Catherine Schenk; brother, Timothy (Amy) Schenk; brother, Michael (Connie); brother, Matthew (Maureen) Schenk; and brother, Kevin (Sarah) Schenk. A celebration of life will be held at a later date. Donations can be made to the American Cancer Society.

The family of Patrick "Pat" Schenk created this Life Tributes page to make it easy to share your memories.

Send flowers to the Schenk family.