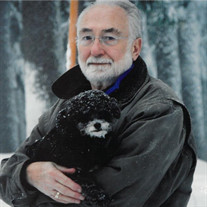 Philip Harman Wilson passed away surrounded by his family and in loving care from the Thanksgiving House in St. Helens, Oregon on Friday March 22nd. He was 81 years old. Phil was born in Chickasha, Oklahoma as an only child to Ethel Harman Wilson and Reuben Walter Wilson. In his early years his parents, who were both educators, moved to Filer, Idaho and this is where Phil grew up and graduated from Filer High School on 1955. In high school Phil enjoyed FFA, playing saxophone in the band, and being on the annual yearbook staff. After graduation he went to the University of Idaho in Pocatello for three years, and for his senior year he transferred to the University of Oregon where he received a Bachelor of Science in 1959. He then went on to continue his education at Berkey Seminary School where he became an ordained American Baptist Minister and was the Youth Minister at Grant Park Church in Portland, Oregon. He later attended the Emerald Baptist Church in Eugene, Oregon. Returning to Eugene he went back to graduate school at the University of Oregon where he received his Master of Science in 1967, and his Doctor of Philosophy in 1969. Phil then went on to work as a Clinical Psychologist at the Dammasch State Hospital as head of the Adolescent Program during the 70’s. This is where he met many lifelong friends and colleagues. In the 80’s he went into private practice at Meridian Park Hospital and later worked in several local school districts doing psychological testing and supporting school districts educating children with special needs. Phil also taught some psychology classes at Marylhurst and Linfield Colleges in Oregon and provided Interfaith Counseling services in Portland. Phil retired in 2005. His career is a reflection of his kind heart and his desire to help others. Phil took great pride in his two sons Dale Wilson, his wife Jen and daughter Makala, and grandson Thomas Wilson from Boise, Idaho and Jay Wilson, from Portland, Oregon. Phil enjoyed sailing on the Columbia River, traveling, bike-riding, camping, and trips to the beach. For the past 25 years Phil has lived in Scappoose, Oregon and this is where he met his wife Laurie Holdner-Wilson. Phil will be greatly missed as he was a gentle, kind, and very caring man. In Phil’s later years he was diagnosed with Alzheimer’s Disease and died from complications from this disease. Phil participated in research at OSHU to help fight Alzheimer’s. He was always hopeful that someday there would be a cure for this devastating disease. Services will be held on April 6th at 3:00 PM at the First Lutheran Church, 360 Wyeth St. in St. Helens, Oregon 97051. Donations can be made to OHSU Foundation/Layton Alzheimer’s Center and mailed to 1121 SW Salmon St., Portland, Oregon 97205- (Memo line please indicate Alzheimer’s Research) Please sign our online guestbook at www.columbiafh.com

Philip Harman Wilson passed away surrounded by his family and in loving care from the Thanksgiving House in St. Helens, Oregon on Friday March 22nd. He was 81 years old. Phil was born in Chickasha, Oklahoma as an only child to Ethel Harman Wilson... View Obituary & Service Information

The family of Philip Harman Wilson created this Life Tributes page to make it easy to share your memories.

Philip Harman Wilson passed away surrounded by his family and...

Send flowers to the Wilson family.