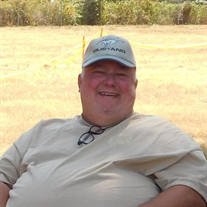 Randolph Gray Sykes Jr. was born May 28 1954 in Honolulu Hawaii. The first of seven children for Mary Margret Murray and Randolph Gray Sykes. Randy lived in Hawaii, Guam and Washington in his early years as his father was in the Navy, He always spoke fondly of those years running barefoot in Guam playing with his Tonka trucks with his brothers. Riding on a ship coming back to the states. The family settled in Scappoose in the 60’s. Randy attended Scappoose schools and graduated from Scappoose High School in 1972. From there he went on to work for the Railroad, then the shipyard and spent the final years of his career working for Morgan industries at Intel. He was a member of the UA Union Local No 290. Randy greatest passion was his cars. He loved cars and anyone who knows him knows it was Fords. He looked forward every year to the Portland Swap meet and sitting and talking with all his buddies. He often took a couple cars to sell and would end up coming home with more than he took. He just could not pass up an ole Ford. He often would buy an entire car just to get one or two parts off it. Randy had a big heart and was the one everyone went to when they were in need. He was always helping someone out and didn’t want any attention for doing so. Randy met the love of his life Lorene Conn. He spent the last 11 years of his life with Lorene. He was her knight in shiny armor. They enjoyed going to auctions, out to dinner with friends, trips to the beach and cruising in their convertibles. They attended many of the local car shows. One of their yearly trips was the End of World Rod Run. He loved the Long beach – Ocean Park area. In July 2018 Randy had a stroke and while recovering from the stroke his cancer returned. They were unable to treat the cancer this time. He fought for 10 months but there was not a miracle to be found and he lost his battle April 25. He passed peacefully at home with his wife Lorene and friend Patty James at his side. Randy is survived by his wife Lorene, step daughter Valerie Gagnier (Matt) and grandson Henry. Special friend Patty James. Brothers: Norman, Michael (Gail), Jerry (Lynn), Darryl (Shauna) and Duane (Tami). Nephews: Tyrus Sykes, Alex Sykes, John Ihle (Christina), Brandon Sykes. Nieces: Jackie Sykes (Kristin) , Bella Sykes, Rosie Sykes, Elke Town (Zac), Jessica Olmos (Robert), Tiffany Ihle, Rachel White (Jeff), Crystal Romero and several great nieces and nephews. Randy was preceded in death by his parents Randolph Sr & Mary Sykes and Sister Debbie Sykes. A Service will be held at the St Helens Moose Lodge May 4th from 12-3PM Please sign our online guestbook at www.columbiafh.com

Randolph Gray Sykes Jr. was born May 28 1954 in Honolulu Hawaii. The first of seven children for Mary Margret Murray and Randolph Gray Sykes. Randy lived in Hawaii, Guam and Washington in his early years as his father was in the Navy, He always... View Obituary & Service Information

The family of Randy Gray Sykes Jr. created this Life Tributes page to make it easy to share your memories.

Send flowers to the Sykes family.