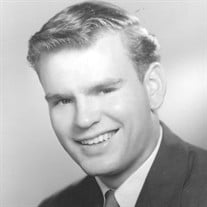 Raymond Richard “Dick” Hudson passed away on July 23, 2018. Dick was born on January 26, 1936, to Raymond and Frances Hudson and was the second of six children. Dick is survived by his wife of 63 years, Wanda Ruth King Hudson; daughters, Deborah Knebel (Steve) and Dana Garcelon (Sam), and granddaughters, Brooke and Faith Garcelon. Other survivors include sisters, Carole Barr, Tigard, Oregon, Dorothy Thomsen (Ron) Seattle, Washington; sisters-in-law, Evelyn Hudson, Scappoose, Fran Hudson, Spokane, Washington and Laura Lu Carlton, Mesa, Arizona; numerous cousins, nieces and nephews, great- nieces and nephews and great-great nieces and nephews. Dick was preceded in death by his nephew, Scott Barr in 1983, mother, Frances Hudson in 1990, brother, Jim Hudson in 1996, father, Raymond Hudson in 2006, brother-in-law, Maynard Barr in 2007, great-nephew, Elijah Rao in 2009, brother, Doug Hudson in 2013, and brother, Jerry Hudson in 2016. Dick grew up in Wapato and attended grade school and high school in Gaston, Oregon, where he met Wanda in the sixth grade. His family moved to Scappoose his senior year of high school and opened the Hudson Farm Supply. After the store closed, Dick eventually went to work for Scappoose Sand and Gravel where he earned the reputation as “Loader Extraordinaire” and from where he retired in 2001. Dick was involved in his community early on as a Scappoose City Council member acting as Police Commissioner, was a member of the Jaycees, Elks Lodge and Masons, and was a recipient of the Scappoose Distinguished Service Award. He loved sports and could often be seen with an earphone listening to a game on the transistor radio while watching a different game on the television. He was a star basketball player at Gaston High School and still holds the record for highest score in a basketball game. Dick also won several bowling trophies over the years. His ultimate passion became the game of golf. Oftentimes he weathered the relentless ribbing from his younger brothers for two things - standing on the wrong side of the ball to hit it and standing too close to it after he did hit, with a huge smile. He liked the simple pleasures in life of walking, reading, and most of all being around his family and friends chatting and joking around. He was not only known for his signature bucket hat, but also for his good moral character, integrity, always being humble and kind, and a true gentleman. He was admired and loved by everyone he met. The Hudson family would like to extend our gratitude to all the staff at Adeo Home Care, Legacy Hospice and Avamere for their attentiveness and loving care. Their assistance was invaluable and enabled Dick to remain at home with his family. In lieu of flowers, we ask that contributions be made in Dick’s name to a research facility for Dementia and/or Prostate Cancer of your choice. A Celebration of Life will be held at the St. Helens Elks Lodge at 2 p.m. on Saturday September 8. Golf attire requested and come ready to Tee It Up!

The family of Raymond "Dick" Hudson created this Life Tributes page to make it easy to share your memories.

Send flowers to the Hudson family.