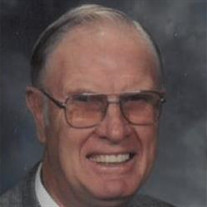 Robert G. Burns April 2, 1928 ~ February 10, 2018 Robert G. Burns went to be with our lord on February 10, 2018. He was 89 years of age. Robert was born on April 2, 1928, to Arthur and Margaret Burns in St. Helens, Oregon. He attended grade school at Chapman and Jewel, graduating from Scappoose High in 1946. Bob joined the U.S. Army after graduation and served two years in occupation forces in Japan. In 1948 he became a self-employed logger in the Columbia County area for 16 years. He was known for his expertise in merchandising and the falling of timber. Then in 1964 he decided to go to work for Crown Zellerbach. After Crown closed, he went to work for Wauna, working in the Pole and Piling industry for 29 years. Bob retired from Wauna in 1993. In 1952 he married Billie Jenkins and together had two children, Patsy and Stan. They lived in Scappoose where Bob built his first home. Bob was very active in Grange, becoming a "Master." He was also active in Lion's, serving as president. He was a member of Grace Baptist Church. He enjoyed and loved the outdoors, traveling, hiking, and his grandchildren. In 1975 Bob married Colleen Hoyt, moving to St. Helens. They had three homes built and enjoyed every minute of the building process. They loved the outdoors and together they traveled to Canada, Hawaii, Wyoming, and many other places where they did much hiking. Mt. Rainier was their favorite. He enjoyed his grandchildren and great-grandchildren. They were so precious to him. Bob was a gentle and kind person and will be truly missed by us all. Suffering so much pain over so many years, he is finally at rest with our dear Heavenly Father. Bob is survived by his wife of 42 years, Colleen Burns of Scappoose; his children, Patsy Steinfred of Portland and Stan Burns of Scappoose; his stepchildren, Sherrie Dobyns of John Day, Michael Hoyt of Warren and Mark Hoyt (deceased); nine grandchildren; and 19 great-grandchildren, with two more on the way. No services will be held according to Bob's wishes. In lieu of flowers, donations can be made to Grace Baptist Church. Online condolences may be sent to the family at www.columbiafh.com. Columbia Funeral Home is in charge of arrangements, 503-397-1154.

The family of Robert G. Burns created this Life Tributes page to make it easy to share your memories.

Send flowers to the Burns family.