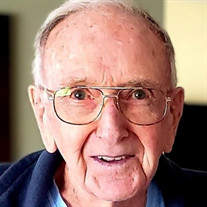 Robert Dennis “Dan” Edwards, 94, a lifelong resident of the St. Helens area, passed away peacefully at home on February 25, 2022. Robert Dennis Edwards was born February 1, 1928, in Portland, Oregon, the fourth of six children born to John and Martha (Johnston) Edwards. Known as Dan from childhood, he was raised on the outskirts of St. Helens in McNulty and attended the McNulty School and Scappoose High School. Dan met Charity Grace “Cheri” Cade at the local skating rink and they were married on March 26, 1946 in Hillsboro. Together they raised their two children, Sharon Elmira and Robert Dennis Edwards Jr., in St. Helens. They joined the First United Methodist Church. Dan began working at the Fir-Tex plant at the age of 16 and after nine years began working at the Paper Mill where he worked until retirement. He enjoyed fishing, locksmithing, old cars and car shows, going to casinos in Reno and other places, and time spent at Ocean Park, Washington. Following Cheri’s passing in 1997 he shared a special friendship with sister-in-law Phyllis and they enjoyed many cruises together and looked after one another at home. He also enjoyed time spent with his large family. Dan spent the last two years with Sharon and Ernie and passed away at their home on February 25, 2022 at the age of 94. He is survived by his companion Phyllis Cade; daughter and son-in-law, Sharon and Ernie Zimbrick of St. Helens; 8 grandchildren; 16 great-grandchildren; 10 great-great-grandchildren; brother Ray Edwards of St. Helens; sister Ora Roby of Tacoma, Washington; and numerous nieces, nephews and friends. He was preceded in death by his wife of 51 years; his son Rob Edwards; his parents; brother Johnny Edwards; sister Meta Urie and great-grandson Keenan Foster Williams. A viewing will be held Friday, March 4 at Columbia Funeral Home between 2:00-5:00 PM. A graveside service will be held on Saturday, March 5 at 1:00 PM at Bethany Memorial Cemetery in Warren.

The family of Robert Dennis Edwards created this Life Tributes page to make it easy to share your memories.

Send flowers to the Edwards family.