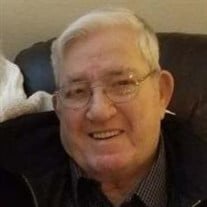 Robert Alfred Kearsley, 91, passed away at home surrounded by family at 11:15 pm on December 8, 2019. He was born December 6, 1928 in Victor Idaho to Hyrum and Lucy Kearsley. He and his family moved here June 1940 at 10 years old and was a resident of St. Helens for over 79 years. He lettered all 4 years of high school in football, basketball, and track, and then married his high school sweetheart Anna Mae, on June 5th, 1951. They were married 67 years until she preceded him in death earlier this year. An active member of the Church of Jesus Christ of Latter-day Saints for most of his life, he loved his calling to be a temple worker most. Known in the community for his log truck company that operated for many years, he retired only this year at the age of 90. Robert is survived by his children Terecia Sigler, Durell and Gail, Drue and Rita, Dirk and Sherene, 15 grandchildren, 14 great-grandchildren, his brothers Dewey and Keith, and sister Ranae, and extended family. Robert is preceded in death by his wife Anna Mae, his parents, brothers Kent, Forrest, and Duane, and great-grandson Wyatt. Services will be held at the LDS church on Sykes Rd. in St. Helens on December 20th at 1pm.

The family of Robert Alfred Kearsley created this Life Tributes page to make it easy to share your memories.

Robert Alfred Kearsley, 91, passed away at home surrounded by...

Send flowers to the Kearsley family.