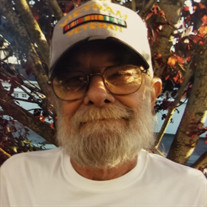 Robert Alan Wilson February 21, 1947 ~ February 6, 2018 Robert Alan Wilson of Scappoose, Oregon passed away on February 6, 2018 at OHSU hospital in Portland, Oregon at the age of 70. Robert was born in Washington Terrace (Ogden), Utah on February 21, 1947, living most of his life in Portland, Oregon and in the Long Beach, California area for approximately ten years. Robert served two tours in Vietnam ranking as a specialist E4, later working at Schetky NW in Portland, Oregon and Terex Utilities in California and Tigard, Oregon. In Robert’s free time he enjoyed riding motorcycles, golf, working on cars, boats, and models, as well as wood working. Robert is survived by his daughters Angela and Beth and his grandchildren, Lorin, Megan, Michael, Melina, David, Danielle, and Dennis. He is also survived by his brother Steven, sister Linda and her husband Ken, as well as their children Chris and Vicki. He is predeceased by his brother Marc, and his parents Marguerite and John. Services will be held on February 21, 2018 at 10am at Willamette National Cemetery. A witness placement of Roberts cremated remains will take place at Willamette National Cemetery February 22, 2018 at 3pm. Columbia Funeral Home is handling the arrangements.

The family of Robert Alan Wilson created this Life Tributes page to make it easy to share your memories.

Send flowers to the Wilson family.