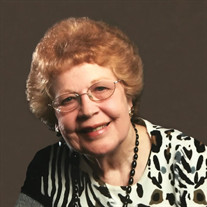 Ruth Hope Zornes (Granny), 80, of Scappoose, Oregon passed away in her home on Sunday, August 9th, at 8:09 AM following complications of a subdural hematoma she suffered due to a fall at home. Ruth was born May 16, 1940 in Phoenix, AZ. She was the 10th surviving child of William Owen Wines and Mary Essie Wilkerson. Ruth was raised in very impoverished circumstances due to the untimely death of her father when she was just two years of age. At that time, Ruth and 5 of her siblings lived in a home without indoor plumbing or cooling. She often joked that the reason she got married so young was so she could live in a home with an indoor toilet. In reflection of her early childhood, Ruth said, “Being poor wasn’t all bad. We had lots of fun! Playing cowboys and Indians, (I always got to be Dale Evans) shooting each other with homemade sling shots (that’s not what we called them then), climbing trees , building roads for our little cars, using empty grocery containers we built grocery stores, operated on our dolls with the Dr. and nurse kits Santa left for us, stealing roses from the neighbor’s yard and spoonfuls of mayonnaise from the ice box. We swam in the canal and spent many hours floating through the culvert pipe that ran under 40th St. The slide to the swimming hole was mud and man-made each time we swam. Ava’s (older sister) boys were most often included in the mischief. Being nine months older than the oldest nephew, Jerry, I also got to be the boss. Rick and Mike never questioned the authority until we got to be a few years older. We had time to torment our parents because there was no T.V. to watch.” Ruth’s formal education was spent at Wilson School; a place she calls “my window to the world and I loved them.” She fondly remembers never missing a day of school from grades 5 – 8. Her favorite teacher was Alfred Layfayette Cheek. His impact on her was so strong that she reached out to him in 1968 to congratulate him for being honored as Arizona teacher of the year. She later completed her GED and was enrolled in classes at Portland Community College. Because of her impoverished living conditions, after the conclusion of the 8th grade Ruth did not feel that she would be afforded the opportunity of going to high school because she could not afford the bus fare, locker, fees or lunches. It was at this time she met James Earl Zornes. James was 17 and asked her to marry him. So at the tender age of 14 years 3 month on August 13, 1954 Ruth and James were married in a small Phoenix church. (A friend had signed a document swearing that Ruth was 16 allowing her to secure a license with her and James’ parent’s permission.) Ruth became a mother with Sandi (65) being born in 1955, followed by Jim (63) in 1957, then Cyndi (62) in 1958 and finally Donna (60) in 1959. So here was Ruth, a mere 19 years old with 4 children under the age of 5. Ruth and James lived in various places around the Phoenix area until 1962, when, due to employment opportunities, they relocated their family to Sequim, WA. They spend 9 years in Sequim, before moving to Scappoose, OR in 1971. During that time, in addition to being a very busy wife and mother, Ruth enjoyed employment as a copy editor for the Sequim Press, an operations manager for Western Bank, a State of Oregon employment officer, and finally a residential cleaning operator for the past 30 years. Known for her love of service, Ruth was a member of the Church of Jesus Christ of Latter-Day Saints, having joined as a convert when she was 17 years old. Ruth served as a teacher in the primary, young women’s, music, and seminary organizations, and as president of the Relief Society for many years. One of her favorite down time hobbies was to play her organ, a self-taught instrument she played for many years. Ruth is survived by her husband, James Earl Zornes, Sr., daughters Sandi Finch (Bill) of Eagar, AZ; Cyndi Noble (Ken) of Lehi, UT; Donna DeWolfe (Steve) of Scappoose, OR, and son, Jim Zornes (Cheri) of Beavercreek, OR. Ruth is grandmother to 20 children and great-grandmother to 56. Ruth will be laid to rest Friday, August 14 at 11:00 AM at Columbia Memorial Gardens in Scappoose. Visitors welcome. (Please practice social distancing and masks required.) Visitation can be made on Thursday, August 13 from 5 – 7 PM at Columbia Funeral Home, 681 Columbia Blvd, Saint Helens, OR. Ruth made the following journal entry on February 22, 2012: “Saw this quote on Face Book today. . . ‎ "When you remember me, it means that you have carried something of who I am with you, that I have left some mark of who I am on who you are. It means that you can summon me back to your mind even though countless years and miles may stand between us. It means that if we meet again, you will know me. It means that even after I die, you can still see my face and hear my voice and speak to me in your heart. For as long as you remember me, I am never entirely lost..." Loved it! Hope my life somehow impacts my family to think like that.” You will never be lost in our hearts and in our minds.

Ruth Hope Zornes (Granny), 80, of Scappoose, Oregon passed away in her home on Sunday, August 9th, at 8:09 AM following complications of a subdural hematoma she suffered due to a fall at home. Ruth was born May 16, 1940 in Phoenix, AZ. She... View Obituary & Service Information

The family of Ruth Hope Zornes created this Life Tributes page to make it easy to share your memories.

Send flowers to the Zornes family.