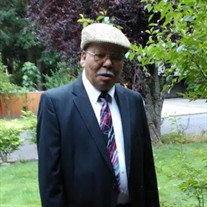 Samuel Nabors was fondly known as The Father, Uncle Sam, Samuel J or Granddaddy. He was born in Black Mountain, North Carolina on December 20th, 1935 to Sallie Ella Frances Nabors and Joseph Edgar Nabors. He was one of 9 children; he was number 7 in birth order. As a young boy growing up Samuel lived in the foothills of Black Mountain, which is located in between the Blue Ridge Mountains and the Great Smokey Mountains and had many sweet and funny stories of that country life. He always kept a job, even as a young kid he loved working and helping out his mother in any way that he could. Later in life he moved up North to New Haven, Connecticut with some of his siblings where he spent many years. He had a great love for music all of his life, especially Jazz and soul music. He became a musician himself and played the bass fiddle and the saxophone. He joined the military and earned his high school diploma and served for three years in Bordeaux, France. He received an honorable discharge from the military. While being stationed in the Pacific Northwest, he met the love of is life Velma. Together from this union they raised five beautiful children: Christopher, Sabrina, Lori, Jeffrey and Jennifer. The marriage lasted over 54 years! He has always been an adventurous person, in his younger years he drove his family across county from New Haven, Connecticut to Portland, Oregon. He started his education at Portland Community College in automotive and became a diesel mechanic. He worked in this profession for over 30 years and provided for his family doing something that he was great at. He gave his life to God and devoted himself as a Jehovah's Witness. He has read the bible many many times over and spent countless night's preparing to speak to his congregation and reach out to the community to share God's word. He was preceded in death by his wife Mary Velma Nabors, his mother and father his sisters Joe Bessy, Oda Lee, Mary, Loise and a brother Edward. He is survived by sister Dolly Nabors, Susan Sanders, William R. Nabors (brother everyone calls Uncle Ronnie) and his children: Christopher Evens, Sabrina Robinson, Lori Nicholson, Jeffrey Nabors and Jennifer Arias- Gonzales. As well as his grandchildren: Valerie Nabors, Nichole Feng, Jazmine Mason, Anthony Nabors, Bryan Nabors, Stephen Nabors, Cheri Smith, Stephanie Ayers, Jeremy Vargas and Kieran Arias Nabors and a host of great grandchildren, nieces, nephews, other relatives and friends.

Samuel Nabors was fondly known as The Father, Uncle Sam, Samuel J or Granddaddy. He was born in Black Mountain, North Carolina on December 20th, 1935 to Sallie Ella Frances Nabors and Joseph Edgar Nabors. He was one of 9 children; he was number... View Obituary & Service Information

The family of Samuel James Nabors created this Life Tributes page to make it easy to share your memories.

Send flowers to the Nabors family.