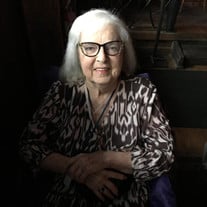 Shirley Flock Griffin passed away, on Monday, June 1, 2020 peacefully in her home surrounded by her family. She was 88 years old. Shirley was born April 5, 1932 in Calgary, Alberta, Canada. She attended Crescent Heights High School in Calgary and The Music Academy of the West in Santa Barbara, California, 1948-50. She studied voice under Joseph Klein in Glendale, California, 1950-52. Shirley received her Associates Degree in Drug and Alcohol Counseling from Clark College in Vancouver, Washington in 1979. While sharing the same music teacher in 1951, Shirley met the love of her life, William Pearson Griffin. They were married on July 25, 1953, in her hometown of Calgary, Alberta, Canada. Bill and Shirley shared both a talent and a passion for music. Shirley's beautiful mezzo soprano voice awed and inspired all those who heard her. They retired to Penn Valley, California in 1985 where they both made a huge contribution to the musical community through Music in the Mountains and the Allegro Alliance. Bill and Shirley made beautiful music together for 51 years. Bill passed away in 2004. Shirley moved up to Scappoose, Oregon in 2007 to be close to daughter Carol and family. She sang with the Columbia Chorale of Oregon and attended the Plymouth Presbyterian Church in Saint Helens, Oregon. Bill and Shirley were blessed with 4 children, 9 grandchildren, and 9 great grandchildren: Shirley will be lovingly remembered by her children: Cacia and Robert Sit of Chicago, Illinois, Arleigh F. Griffin of Grass Valley, California, Karen Griffin and David Steensen of Medford, Oregon and Carol and Billy Moore of Scappoose, Oregon. Her grandchildren and great grandchildren are: Angela and Chris Tagler and daughter Catherine; Anne Griffin; Sarah Griffin Boubacar and Michel Boubacar and sons Adama, Issa and Assane; Jessica and Micah McFadden and children Elise, Vanessa and Miles; Cacia Steensen; Severin Steensen; Vicki and Joshua Peterson and sons Lucas and Cal; and Henry Moore. Shirley is survived by brother, Henry Flock of Calgary, Canada and numerous nieces and nephews, extended family, and dear friends. Shirley was predeceased by husband, William P. Griffin and granddaughter, Veronica McHale. A celebration of life will be held next summer, 2021.

Shirley Flock Griffin passed away, on Monday, June 1, 2020 peacefully in her home surrounded by her family. She was 88 years old. Shirley was born April 5, 1932 in Calgary, Alberta, Canada. She attended Crescent Heights High School in Calgary... View Obituary & Service Information

The family of Shirley Cacia Mary Flock Griffin created this Life Tributes page to make it easy to share your memories.

Send flowers to the Griffin family.