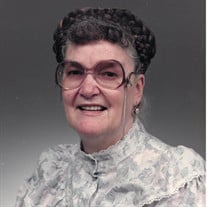 We will begin by saying: Balderdash and Bunkum! I am with you. We are going to celebrate an amazing lady, who we are lucky enough to call Mother, Grandmother (Nini), and friend to many. She was born Shirley Carson Buchanan on June 22, 1924, in Moose Jaw, Saskatchewan, Canada, to James and Florie (Bunn) Buchanan, the third of four daughters. At the age of 10, the family moved to Vancover, BC, where she lived until she got married at the age of 18, and moved to California with her husband. In 1949 the family relocated to Oregon where she stayed. She raised the family under sometimes challenging conditions, and displayed a combination of strength, grace, and perseverance that was admired by all who knew her. At the age of 48, she obtained her driver’s license, which opened up the world to her, and she never got tired of going for a drive. She worked many years at Riverside Training Center, as the homebound instructor, working with the physically or mentally challenged. She started the Wednesday afternoon bowling program, which continues to this day. She retired on her 75th birthday, and after a couple of years she became a “Foster Grandparent” in the St Helens school district, and loved working with elementary school students. She said she never got tired of “seeing the light come on” when a student grasped a new concept. She had regretted having to quit school to work during the depression, and when she pretested for a GED, passed with a high enough score that she didn’t need to follow up with any classes. She was pleased how impressed everyone was with her scores. She was honored by the community one year by being the Queen of the My Fair Lady Court, and another year was the Grand Marshall of the Kiwanis parade. Her husband, Tom Kennedy, two children, Larry and Shannon Kennedy, one great grandson Patrick Kennedy, and two sisters, Norma and Dell, preceded her in death. She is survived by four children: Kerry Kelly of St Helens, Mike (Beth) Kennedy of Rainier, Brian (Linda) Kennedy of Warren, Oregon, and Colleen Kennedy of Lake Stevens Washington, her grandchildren: Steve (Eileen) Kelly of Mesa, Arizona, Stacy (Bill) Wilson) of St Helens, Oregon, Shaun (Teresa) Kennedy of Kelso, Washington, Ken (Ali & Nicole) Kennedy, of North Plains Oregon, Diane Kennedy, Beaverton, Oregon, Dan Kennedy of Warren. She has four great grandchildren, Nash and Mara Wilson of St Helens, and Carson and Anastasia Kennedy of Kelso Washington, and is survived by one sister Glenda Buchanan of British Columbia, Canada. There will be a service March 8th, at 2:00 PM at the Columbia Funeral Home in St Helens, Oregon. A reception is to follow at the Senior Center at 375 S 15th Street, in St. Helens. Please sign our online guestbook at www.columbiafh.com

We will begin by saying: Balderdash and Bunkum! I am with you. We are going to celebrate an amazing lady, who we are lucky enough to call Mother, Grandmother (Nini), and friend to many. She was born Shirley Carson Buchanan on June 22, 1924,... View Obituary & Service Information

The family of Shirley Carson Kennedy created this Life Tributes page to make it easy to share your memories.

We will begin by saying: Balderdash and Bunkum! I am with you.

Send flowers to the Kennedy family.