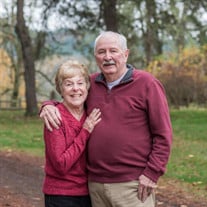 Shirley Jean Parsons Born June 20, 1942 in St. Helens, Oregon to Ruth and Walter Kallberg, passed away on May 31, 2020, at the home with her husband of 58 years Larry Parsons. Shirley met Larry Parsons her freshman year at Scappoose High school, where she was the valedictorian of her graduating class, and earned a full ride scholarship to the University of Oregon. Larry and Shirley married in March of 1962, they recently celebrated 58 years of marriage. Shirley grew up on her family’s property on Berg Road, where Larry and Shirley built their family home in 1976 and remained until her passing. After raising her three sons, Shirley started her employment career working for local attorneys, then moving on to the city of St. Helens and the Port of St. Helens, where she retired as an operations manager in 2002. Retirement was a time of travel for Larry and Shirley. They visited 49 states and several Canadian Providences in their 5th wheel. Shirley is survived by a sister Beverly Ashenfelter, and many generations of nieces and nephews. Larry Bruce Parsons Born February 6th, 1942 in Chippewa Falls, Wisconsin to Roy and Thelma Parsons. Larry Passed away on June 8th, 2020 in his home of 46 years, surrounded by his 3 loving sons. Larry’s early years were spent in Wisconsin and California, and then moving to Scappoose when he was in the 5th grade. He graduated from Scappoose High school in 1960, where he was a 4 year letterman for baseball, he then earned a business degree from University of Oregon in 1964. Larry had a diverse employment career, starting at US Bank, building residential houses, and in 2001 Larry retired as a residential appraiser. Larry’s greatest joy in life was watching his 3 sons and 7 grandchildren at sporting events. Larry attended every football, basketball, and baseball game of his sons’ high school careers. Larry was known for never being late to a game, sometimes arriving before the team. Larry had a love of the outdoors. Starting as a young kid Larry would always be outside fishing or duck hunting. Later he enjoyed fishing in Alaska and spent many days on the river salmon fishing. Larry passed on his love of the outdoors to his sons with yearly camping and hunting trips. Cribbage was always a family pastime. Larry and Shirley taught all the grandchildren to play and when the family got together there was always a game going. Larry is survived, by his brother Harold Parsons of Somerville, MA and his sister Mary Dierks of Meridian, ID. Larry was preceded in death by his parents and his older brother Dale. Larry and Shirley were survived by their son Jeff (Katie) of Sisters, OR, grandsons Hayden and Colby. Their son Scott of Bend, OR, grandsons Jacob, Justin, and granddaughter Anna. And their son Mark (Christina) of Warren, OR and grandsons, Owen and Ross. Larry and Shirley had a love that started when they were in high school and lasted their lifetime, with over 58 years of marriage. A private interment will be held at Bethany Lutheran Cemetery. In lieu of a formal service, an open house will be held to celebrate and remember the lives of Larry and Shirley Parsons on June 20, 2020 2-4 pm at the home of Mark and Christina Parsons, 33925 Slavens Road, Warren, Oregon.

Shirley Jean Parsons Born June 20, 1942 in St. Helens, Oregon to Ruth and Walter Kallberg, passed away on May 31, 2020, at the home with her husband of 58 years Larry Parsons. Shirley met Larry Parsons her freshman year at Scappoose High school, where... View Obituary & Service Information

The family of Shirley and Larry Parsons created this Life Tributes page to make it easy to share your memories.

Send flowers to the Parsons family.