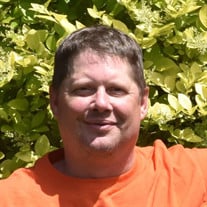 Stephen Brian Andrews (48), beloved father, son, and brother passed away on 4/23/2021. Steve was born in Walnut Creek, CA on 10/12/1972, the youngest of two boys. In 1979 Steve moved with his family to Portland ,OR. As a child Steve enjoyed skiing, fishing, swimming, camping, skateboarding and several sports. Very early he formed a love for the Pittsburgh Steelers, which was his lifelong NFL team. As a teenager, he became interested in music and in going to live underage shows, particularly in the punk rock vein. From this influence, he was drawn to the drum kit and taught himself to play drums. After graduating high school, Steve quickly took to auto mechanics and worked for several years at Tune-Rite. These skills served him well in life, as he changed a head gasket from the road while touring the U.S. with his band, The Drapes. Steve played drums in many Portland bands including The Drapes, Submissives, Hellside Stranglers, Naked Violence and others. During these band years Steve bartended at EJ’s, one of the live music venues in Portland in the 1990’s. Between bartending and playing music, Steve, commonly known as “Little Stevie”, was a common fixture in the Portland music scene. In 2007, Steve went on to work for R &H Construction, where he quickly added to his wide array of carpentry skills. He loved hard work, physical labor, and construction. Steve got much satisfaction in seeing a project he was working on completed. His employers loved him for his hard work and skill, which is why he was amongst the first to be chosen by the foreman for many job bids. Steve’s carpentry skills served his family and friends many blessings over the years. He loved to help others on home projects which was part of his many gifts to his friends and family. At his core Steve was a giving person, as a result he gave much more to this world than he took from it. Steve married Jennifer Gibson in September 2008. In 2009, Eli Andrews was born, the first of Steve’s beautiful children. In 2012, Emmett Andrews was born, adding a second boy to the family. Shortly after Emmett was born, the family made the move from Portland to St. Helens, OR. In 2016, Amelia Andrews was born, and a girl was added to the growing family. Fatherhood was Steve’s greatest joy in life, and nothing made him “light up” like seeing his kids. He is remembered with love by his children Eli, Emmett and Amelia; ex-wife Jennifer Andrews; parents, Ray and Jan Andrews; brother, Ed Andrews; sister in law Megan Taylor; cousins, aunts, uncles, and many friends and people that he has touched over the years. He will be dearly missed.

The family of Stephen Brian Andrews created this Life Tributes page to make it easy to share your memories.