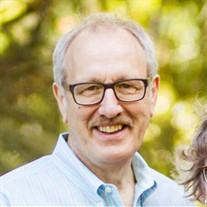 Steven Allen Correll was born on February 11, 1952 in Eureka, California, and when he was around five, the family relocated to Port Angeles, Washington. He graduated from Port Angeles Senior High in 1970, then attended two years at Peninsula Community College. At 50 he returned to complete his Bachelor’s degree in Business Administration at Concordia University in Portland, Oregon. Steve held several positions in a variety of fields, first as a chef in a few locations, then spent the majority of his time in sales in plumbing, pumps, and instrumentation. In February, he retired from his position with Branom Instruments. The most important focus in Steve’s life was always his family. He married his wife Jeanne Kuehl on April 27, 1974, in Port Angeles, and they shared a life of love and laughter right up to his recent passing. The greatest joys of his life began arriving in 1978 with the birth of his son, Aaron, then daughter Emily in 1983. The most recent claims on his heart arrived at the birth of grandson Parker in 2013 and granddaughter Evelyn in 2015. Steve and Jeanne lived from 1976 to 1984 on Bird Road in Scappoose, Oregon, and in 1984 purchased property in Warren, Oregon, where they lived in a double wide mobile home as Steve built their beautiful home, and it is there they have lived since. Their property is where Steve could pursue his great passion for working the land, driving tractor, raising cows, and playing with his children, and now grandchildren. Steve shared a strong faith with his family and community and served as a youth group leader, elder, usher/greeter, and always shared his love of singing with the choir, a love that led him to become a member of Portland’s Singing Christmas Tree for several years, for which he sang and served on the Board. Steve was a major Trailblazers’ fan and made every attempt not to miss a game on television or the radio and when possible, in person. He coached both boys and girls Kiwanis basketball and soccer, was president of the Warren Water Board for about 20 years and was a current member of the Board of the St. Helens Community Credit Union. He and Jeanne also volunteered regularly to help at community meals in St. Helens. Steve was predeceased by his mother Evelyn and brother Richard and is survived by his father Caryl and his sisters Gloria and Connie of Port Angeles. He is also survived by his wife Jeanne, son Aaron and his wife Melissa and their son Parker, as well as daughter Emily and her husband Bo and their daughter Evelyn. He is also survived by the many, many family members and friends whose love and laughter he earned easily throughout his life. He was an exceptional person, and he loved people, and we couldn’t help but love him. He was such a joy to spend time with, no matter what you were doing. He will be missed, and he will be remembered, so fondly. A Celebration of Steve’s Life will be held on Saturday, August 18th at 2 pm at Redeemer Church, 3210 SE Taylor, Portland, Oregon 97214. In lieu of flowers, please make donations in Steve’s memory to (or become a donor to) Be the Match, online at https://bethematch.org, or the Leukemia & LymphomaSociety, 6915 SW Macadam Ave., Suite 100, Portland, OR 97219, or make a donation to a charity of your choice in your community.

Steven Allen Correll was born on February 11, 1952 in Eureka, California, and when he was around five, the family relocated to Port Angeles, Washington. He graduated from Port Angeles Senior High in 1970, then attended two years at Peninsula... View Obituary & Service Information

The family of Steven Allen Correll created this Life Tributes page to make it easy to share your memories.

Send flowers to the Correll family.