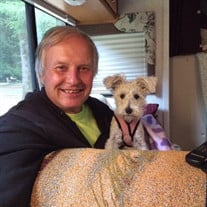 Steven Vincent Cowell May 25, 1955- August 23, 2018 Steven Vincent Cowell of North Las Vegas, Nevada died suddenly August 23, 2018 at the age of 63 in St. Helens, Oregon. Steve was born May 25, 1955 to Kenneth and Joyce Cowell at the Soldiers and Sailors Memorial Hospital in Penn Yan, New York. As a child he attended St. Michael School and enjoyed playing little league baseball. He later graduated from Penn Yan Academy with a scholarship from the American Legion. Steve was an avid golfer in his youth, an esteemed hobby that continued to flourish throughout his adult life. Steve attended Wake Forest University (‘73- ‘76) where he worked toward a degree in medicine while being an active member of the Theta Chi Fraternity. Upon leaving Wake Forest, he then moved to Chicago where he began working for the Chicago and Northwestern Railroad, which eventually led him to Berkley, California. When he left the railroad, he moved to Burns, Oregon before settling in John Day, Oregon where he met his wife Edie and her son Charles. Steve and Edie were married August 17, 1985 and were soon blessed with their daughters Katrina and Sarah. Together they owned and operated the Corral Pastime, a favorited bar among locals for Steve’s New York style pizza. In 1992 the family moved to Gresham, Oregon where Steve began work as an HVAC Technician for Bewley Mechanical. In 2000 he joined UA Local 290 and began to work for Alliant Systems (FKA MacDonald Miller) until he retired in September of 2015. Steve was a passionate member of the union and continued his involvement into retirement. After retiring he and Edie moved to North Las Vegas, Nevada where he spent most of his time golfing with friends, following politics, placing bets in the sports book, and rooting for his many beloved sports teams. Steve loved the Yankees, the Buffalo Bills, NASCAR, and the Vegas Golden Knights. Each year he would enjoy his summer months visiting his children and grandchildren in Oregon with his wife Edie and their dog Murphy. Steve is survived by his wife Edie Cowell, his son Charles (Shareena) McKenna, his daughters Katrina (Virgil) Newberry and Sarah Cowell. Three grandchildren; Addy and Nathan Newberry and Emmalyn McKenna. His mother Joyce Trombley, brother Richard (Linda) Cowell, step sister Molly (Jim) Towslee and step brother Bill Corcoran. Also surviving him are numerous cousins, nieces and nephews. He was preceded in death by his father and step mother Kenneth and Beverly Cowell and his step father Donald Corcoran. A celebration of life will be held September 13, 2018 at 1:00 pm at The Trails at The Resort at the Mountain, 68010 E Fairway Ave, Welches, Oregon 97067.

The family of Steven Vincent Cowell created this Life Tributes page to make it easy to share your memories.

Send flowers to the Cowell family.