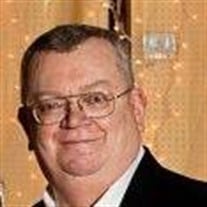 Steven Ray Warren, age 65, of St. Helens, OR passed away on August 4, 2019 at Spring Meadows Assisted Living from long term illness. Steve was born January 1, 1954 in Longview, WA and always felt extra special because the whole world celebrated his birthday. He spent his early childhood in Cathlamet, WA, moving to St. Helens in the early 1960s. He married Vickie in 1975. Steve’s career started at age 17 driving truck for TEDS Furniture. It was that truck that gave him the desire to drive an 18-wheeler. After a few small companies, he started working for Lawrence Oil in St. Helens, OR. He drove for Dave Lawrence for 17 years until moving to Idaho, where he continued to drive fuel tankers. Upon moving back to St. Helens, he drove a short time for Wilcox & Flagel. In his younger years, Steve enjoyed the racing circuit, helping Don West and Howard Patton rebuild River City Speedway at the Columbia County Fairgrounds in the 1980s. He was also on Don’s pit crew and later pitted for Kirk Ray’s “Mouse” Racing Team. Steve was also an avid golfer and helped restart the Men’s Club at Wildwood Golf Course in the mid 1990s. Steve became a Christian in 1996. He was involved with boys’ and girls’ camps, Bible studies, and played the drums with the worship team. Steve loved music of all kinds and could name the song, artist, album, and year of just about any song released from the 1960s through the 1990s. He was a man with a big heart and loved God and his family, including his 3 children and six grandchildren. Steve is survived by his wife of 44 years Vickie Warren, sister Julie Warren, step-daughter Jennie Warren all of St. Helens, daughter Angie Ramos of Warren, OR, son Chris Warren of Troy, ID and six grandchildren. Steve was also very close to his surviving cousin Susie Hirschi of Scappoose, OR, aunt Joy and her husband John Jenkins of Kelso, WA, son-in-law Miguel Ramos and daughter-in-law Jeannette Warren. Steve was preceded in death by his parents Virgil and Shirley Warren, sister Barbara Warren, two brothers Kenny and Keith Warren, and his beloved companion dog, Supy. A Memorial Service will be held in Steven Warren’s honor Saturday August 10, 2019 at 11:00AM at Columbia River Four Square Church, 555 Commons Drive, St. Helens, OR, 97051. Please sign our online guestbook at www.columbiafh.com

The family of Steven Ray Warren created this Life Tributes page to make it easy to share your memories.

Send flowers to the Warren family.