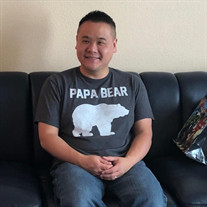 On Tuesday, October12th, 2021, Thang Quoc Tran, loving husband and father of four children, passed away unexpectedly at the age of 42. He was born on February 9, 1979 in Tay Ninh, Vietnam. When Thang was just 1 year old, his father, Hoa, built a boat to help the family escape the dangerous conditions of living under a new Communist ruling party. Thang was 2 years of age when he immigrated with his family to the U.S. and settled in northern Indiana, where he lived the majority of his life. While growing up, Thang spent much of his time learning martial arts, and earned his black belt in taekwondo at the age of 16. Thang graduated high school from Northside High in Fort Wayne, Indiana and went on to earn a bachelor’s degree in computer science from Purdue University in 2004. It was during his college years that he met his wife, Nikki. They were married in 2004 and started their family almost immediately with the birth of their first daughter just 10 months later. Thang was ecstatic, and they went on to have three more children. Thang loved his family and put them first before anything else. Thang worked for several years as a Currency Trader and Analyst for European Trading Corporation in Fort Wayne, then later began to work for JDT Investments as a Currency Trader also in Fort Wayne. In 2014, Thang was offered a Portfolio Analyst position with Standard Insurance Company in Portland, Oregon and moved his family to the area to begin a new chapter in their lives. Since the beginning of his employment with the Standard, Thang was promoted to Portfolio Manager and then to Senior Portfolio Manager just prior to his death. Thang loved his career and was good at what he did. He also loved sports cars, comics and drones and enjoyed sharing these interests with his children. Thang is survived by his wife, Nikki, his daughters Tianna and Olivia, sons Lukkas and Benjamin, father Hoa Tran, mother, Kim Tran, brother Tuan Tran (Lisa), sister Lisa Lin (Jet), mother-in-law Penny Pereira, brothers-in-law Tyler Leavitt (Susan) and Alex Leavitt (Katie), and numerous uncles, aunts, cousins, nieces and nephews who all loved him dearly A small graveside service will be held on Tuesday, October 19th at 2:00 PM at the Columbia Memorial Gardens Cemetery in Scappoose, Oregon. A memorial service will also be held on Saturday, October 23rd.

On Tuesday, October12th, 2021, Thang Quoc Tran, loving husband and father of four children, passed away unexpectedly at the age of 42. He was born on February 9, 1979 in Tay Ninh, Vietnam. When Thang was just 1 year old, his father, Hoa, built... View Obituary & Service Information

The family of Thang Quoc Tran created this Life Tributes page to make it easy to share your memories.

Send flowers to the Tran family.