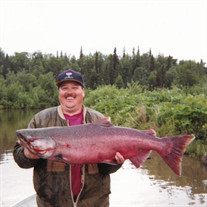 Thomas (Tom) Eugene Hawthorne, 62, passed away in his Scappoose home on Thursday December 31, 2020 surrounded by family. Tom was born on May 26th, 1958 in Hillsboro, Oregon to Gerald and Patricia Hawthorne. He lived in Portland, Oregon until 1990, when he moved his family to Scappoose. Tom attended James John grade school, and Benson and Roosevelt High Schools, where he graduated in 1976. Shortly after high school, Tom met Kelly, the love of his life. They were married in a double wedding with his brother Terry and Joann (Steen) on February 14th, 1981. Tom and Kelly added a daughter, Heather, in 1986, and a son, Benjamin, in 1990 to their family. In 1985, Tom began his career with Pepsi Bottling Group. After 35 years of service and various positions, he retired in December of 2018. Growing up Gerald instilled a passion for the great outdoors in his boys. Tom spent many summers on the commercial fishing boats with his dad and brothers. Then in the fall, they would take off for deer camp. Fishing and hunting were hobbies that Tom continued to enjoy throughout his life, especially with his brother Terry and their wives Kelly and Joann. Yearly summer King fishing at Buoy 10 and campfires of storytelling was always a Main Event down at the beach. Tom has always been an exceptionally social person, this led him to joining the local Moose and Elks clubs, where surprise, he would make more friends. Tom is survived by his wife of 40 years, Kelly; daughter Heather, son-in-law Scott Landtiser, treasured grandchildren Rubi, Maverick, and Birdie; son Benjamin and daughter-in-law Cassi Finch; brother Terry, sister-in-law Joann; brother Timothy and sister-in-law Kelly (Barrera); sister Tamera Firth; mother and father in- law Robert and Roberta Hicks, and numerous nieces and nephews. Tom was preceded in death by both of his parents.

Thomas (Tom) Eugene Hawthorne, 62, passed away in his Scappoose home on Thursday December 31, 2020 surrounded by family. Tom was born on May 26th, 1958 in Hillsboro, Oregon to Gerald and Patricia Hawthorne. He lived in Portland, Oregon until... View Obituary & Service Information

The family of Thomas Eugene Hawthorne created this Life Tributes page to make it easy to share your memories.

Thomas (Tom) Eugene Hawthorne, 62, passed away in his Scappoose...

Send flowers to the Hawthorne family.