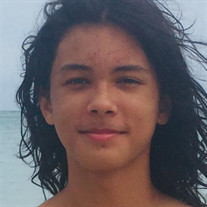 Tobey Gwok Leong Heym, died at 8:45 pm on his 14th birthday, October 17, 2018, after a hard-fought battle against MRSA, with his sister Lily, and his parents Jason and Mayland at his bedside, holding him and comforting him until the end. All of us who knew Tobey are devastated – not just because of his young age, but because it makes no sense to lose such a fantastic kid with so much promise and potential to make the world a better place. Tobey was born at home in Portland, but really grew up on the small family farm in Scappoose that he loved. Along with his sister, he bred and raised rabbits, helped with his dad’s interesting experiment as a pig farmer, built stuff, destroyed stuff, and just generally enjoyed the hell out of his life. He was starting to get into mountain biking, liked duck hunting (but liked his duck dinners more), and would occasionally go out the back door and run 5-miles just because he could. Tobey was an adventurer with his eyes wide open and up for anything. One of his proudest accomplishments was to earn his Brown Belt in Pukulon martial arts two years ago and to continue to follow in Lily’s footsteps to test for his Black Belt this year, which thanks to Lily and his own spirit, he would have achieved. Tobey was an intelligent and curious boy with many interests and he excelled at whatever he put his mind to. He had just entered 8th grade and was looking forward to starting geometry. He loved math and aspired to study engineering. He read at college level and enjoyed reading adventure books but was obsessed with Marvel comics and movies. And Tobey loved playing his trumpet. Rumor is that he would sometimes stand-in for the band director at school. During his long and difficult hospital stay he would calmly and methodically move his fingers as if he were playing. He loved AC/DC and Led Zeppelin and classic rock in general so who knew what he was playing – but he was playing and playing it well. But at heart, Tobey was a home-body. He adored his sister, his mom and his dad, and was very close to his entire extended family – his maternal grandparents, Lyn and Ken who were with him nearly every day in his early years, his aunt Lei Wah and cousin Priya, who was always special to him, and uncles Rob and David and his Heym cousins. He genuinely enjoyed family time and family meals. He was always ready to chip in and help with household or farm chores. He loved food and he loved eating. He was a teenager after all but he took it up a notch. And he baked. Knocking out chocolate chip cookies and lemon tarts in his sleep that no one could match. In essence – and what is Tobey’s gift to each of us – is that he loved life and sought out and discovered new beauty in it every day. He loved babies, small animals, sunrises, stargazing, hikes, kayaking, and cuddles. He was emotionally open and a friend to all. He lived in the moment and made every one he knew feel better. And that is the best legacy any of us could hope for. In lieu of flowers, we are requesting guests bring an unwrapped toy to Tobey’s service. The gifts will be donated to Randall Children’s Hospital at Emanuel Hospital where Tobey received amazing care.

Tobey Gwok Leong Heym, died at 8:45 pm on his 14th birthday, October 17, 2018, after a hard-fought battle against MRSA, with his sister Lily, and his parents Jason and Mayland at his bedside, holding him and comforting him until the end. All... View Obituary & Service Information

The family of Tobey G.L. Heym created this Life Tributes page to make it easy to share your memories.

Send flowers to the Heym family.