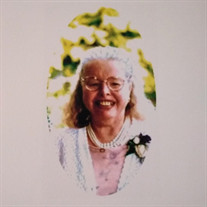 Uldine Marvella Anderson, was born to Carl Israel Anderson and Ethel Julia Anderson on December 27th 1930 at Theodore B. Wilcox Memorial Good Samaritan Hospital in Portland, Oregon. Her birth was very difficult, and she suffered trauma during birth. The family lived in Clatskanie, OR (Swedetown area), and later moved to Warren, OR in 1938. In her childhood, she suffered an severe affliction with Polio. As Uldine needed professional care, she became a ward of the state in her formative years. Though, her parents, and later her brother Elroy, took active roles in her care. She did spend years at the family home in Clatskanie. The farm in Warren, and at her brother’s home in St. Helens. Over the years, an upon the death of her mother, her brother took a very proactive role in her care with the State of Oregon. He took care of her during holidays, birthdays, and bringing her home to St. Helens at every opportunity. Even during snowstorms. Her Nephews and Nieces spend many years enjoying her presence as a special treat, Uldine made it special for each one. Uldine resided at Fairview Hospital in Salem, OR; Columbia Care Home in The Dallas, OR; Columbia Group Home in St. Helens, OR (her brothers long time hometown of St. Helens). Her Churches included, Warren Baptist Church, and Sunset Park Community Church in St. Helens. In 1995, She moved to the Marie Hill Center in Tillamook, OR. There she worked in the ATE Program there for a number of years. She lived a happy and healthy life at Marie Hill Center until her passing on July 31, 2020. Her nieces Trudy and Janice were there for her in her final days. She is preceded in death by her mother Ethel J. Anderson; her father Carl I. Anderson; an older sister who expired at birth, and her younger brother in 2016. She is survived by her Sister-in-Law, Mary L. Anderson. As well as her oldest nephew Martin Anderson, nieces Trudy Hobizal, Judy Sprague, Cheryl Kingston, Janice Johnson, Rose Jewell, Mary J. Anderson, and youngest nephew Mark A. Anderson. Additionally, 22 Great Nephews and Nieces, and many grand Nephews and Nieces. Christmas was by far her favorite time of year. She believed in Santa Clause, the Easter Bunny, and most of all Jesus Christ. She will be remembered as the child spirit she was, and always want to still be forever. Graveside services will be held on August, 22nd at 10am, at Bethany Memorial Cemetery, Warren Oregon. Family Reception at a private family residence. Interested attendees should email Martin [email protected] Special thanks to Columbia Funeral Home, St. Helens, OR. Please direct any and all donations to Marie Hill Center in Tillamook, OR.

The family of Uldine Marvella Anderson created this Life Tributes page to make it easy to share your memories.

Uldine Marvella Anderson, was born to Carl Israel Anderson and...

Send flowers to the Anderson family.