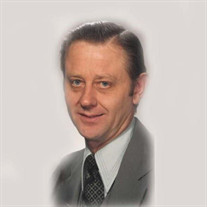 Vernon Clifford Hanson passed away peacefully, with his son Cortland by his side, at the age of 92 on Tuesday, July 7, 2020 at Avamere St. Helens. Because of the COVID-19 virus, a private grave side service was held at Bethany Lutheran Cemetery for family and an outdoor Celebration of Life at the home of Cortland and November Hanson. Vernon was born at home May 21, 1928 just outside of Elk Point, South Dakota on the family farm. He was the third child of Herman Hanson and Christine Bottge Hanson. His siblings were Eileen Hanson Donnelly and Russell Hanson. Vernon served in the U.S. Army from 1951 – 1953. He was a Corporal stationed in Austria. He completed his service in the U.S. Army Reserve in 1957. Vernon married the love of his life Mary Elisabeth Ann Kalstad on January 12, 1955 at the St. Paul Lutheran Church in Elk Point, South Dakota. They were married for 58 years before her passing in 2013. They had eight children between 1955 – 1969 (3 girls and 5 boys) as follows: Clarinda Hanson White, Cortland Hanson, Charlton Hanson, Creighton Hanson, Corinne Hanson, Craylon Hanson (passed away in June 2019), Cornell Hanson and Carla Hanson Villlatoro. They also had 13 grandchildren and five great-grandchildren. In 1956, Vernon and Elisabeth moved to Oregon. During his career Vernon farmed and worked in paper mills while owning and remodeling rental houses. In the last 15 years before retiring, he had his own business as a handyman and doing lawn maintenance. Vernon was active in the First Lutheran Church of St. Helens which he attended for 61 years. His church was not only a place of worship but it is where he made his dearest and closest friends. They gave him great solace after the death of Elisabeth and during his time on hospice care. Vernon wanted to be remembered as a “kind man” who had faith in God. His outgoing personality, desire to have fun and ability to make emotional connections with people made him a wonderful husband, father and friend. Although our hearts are heavy and he is greatly missed…we imagine him joyful and happy in heaven with his wife (Elisabeth), his parents (Herman and Christine), brother (Russell) and sister (Eileen) and his son (Craylon). We like to think of him dancing once again. May he rest in peace and joy. Many thanks to Avamere St. Helens, Signature Hospice Care and his personal care assistant Julie Westwood. The love and tender care that he received in his elderly years is greatly appreciated by his family.

Vernon Clifford Hanson passed away peacefully, with his son Cortland by his side, at the age of 92 on Tuesday, July 7, 2020 at Avamere St. Helens. Because of the COVID-19 virus, a private grave side service was held at Bethany Lutheran Cemetery... View Obituary & Service Information

The family of Vernon Clifford Hanson created this Life Tributes page to make it easy to share your memories.

Vernon Clifford Hanson passed away peacefully, with his son Cortland...

Send flowers to the Hanson family.