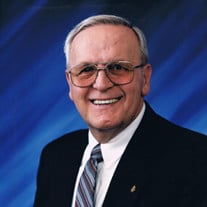 Virgil Lawrence Markus May 12, 1929 - August 4, 2020 Virgil Markus passed away peacefully August 4, 2020 at his home in St. Helens, Oregon at the age of 91. He was born May 12, 1929 to John and Ada Markus in Ravensdale, Washington where he grew up with his older brother Johnny and attended school, graduating with the class of 1949. Virgil later met the love of his life Syble Jones, they were married March 21, 1964 in a little chapel near Seattle, Washington. Together they moved to Oregon in 1969 where they raised their children, in 2004 they settled in St. Helens, Oregon. Virgil worked as a Transportation Manager for Northwest Natural Gas for 27 years. He served as a Past President with the Hillsboro Rotary Club and also served as a Past President with Oregon Auctioneers Association. He and Syble were members of St. Helens Church of Jesus Christ of Latter-Day Saints. He had many interests that kept him busy in his spare time; stock car auto racing was at the top of that list. Virgil was preceded in death by his wife Syble Markus in 2017 and his daughter Virginia "Laure" (Markus) Randall. He is survived by their children Larry Markus, Craig Markus, Adam Markus, Donna Savage, Lloyd Savage, Dale Savage, Sue Green, John Markus and Samantha Sorenson; 15 grandchildren, 22 great grandchildren and 3 great great grandchildren. A viewing will be held August 12, 2020 from 5-7PM at Columbia Funeral Home in St. Helens, OR, with a graveside service being held August 13, 2020 at 11AM at Columbia Memorial Gardens in Scappoose, OR. In lieu of flowers please make donations to the Syble Markus Memorial Scholarship care of OSU Extension Office, 505 N Columbia River Hwy, St. Helens, OR 97051. For those of you that are unable to join, you can view the service here. Virgil Markus Memorial Service Live Feed- Thursday August 13 @ 11 AM PDT: https://meet.google.com/uig-cini-qec

The family of Virgil Lawrence Markus created this Life Tributes page to make it easy to share your memories.

Send flowers to the Markus family.