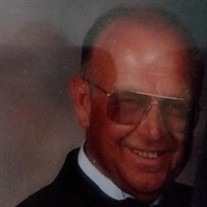 Wayne Joseph Michael Navolynski passed away August 9, 2019 at his home in Columbia City, Oregon at age 83, with his wife, Carol Navolynksi and her daughter, Mariah Flatt by his side. He was born in Longview, Washington on December 23, 1935 to Joseph Norman Navolynski and LaVerne Martha June Peters Navolynski. Wayne grew up and graduated from Kelso High in Kelso, Washington in 1954. Upon graduation, he became a Veteran, serving in the US Army from 1954 to 1957. He went to Lower Columbia Community College in Longview, Washington from 1958 – 1960. After college, he worked for Oregon-Nevada-California Freight Lines (ONC) as a driver from 1969 – 1983. He was a driver for Delta Truck Lines from 1983-1986, a driver for McCracken Motor Freight from 1986-1988, a driver for Oregon Freight Ways from January 1988 to October 1988, and a driver for L.C. Hall Truck Lines in St. Helens, Oregon from 1988-1997. He was an escort for many travelers for Azumano Travel on Holland America Cruise Line in 1997-1998. Wayne enjoyed over 40 cruises, with 6 of them being to Europe, and enjoyed his last cruise with his new wife, Carol and her daughter, Mariah, on a trip to Alaska. Wayne was an active member of the Scappoose Assembly of God Church in Scappoose, Oregon. Wayne had a life-long love for his hobby of H.O. Scale Railroad, and had an enormous collection and loved to show everyone who walked in his door. Wayne is survived by his wife, Carol Navolynski of six years and her daughter, Mariah Flatt, sons, Michael Navolynski, Roy Navolynski, and daughters, Cindy Navolynski, Angela Navolynski and Faith Navolynski, step-daughters Tari Semmler and Julie Thompson and many grandchildren and great-grandchildren. He was predeceased by his step-son, Kory Blackburn, his two brothers, Dale Navolynski and Jerry Navolynski and his mother and father and great-granddaughter Emily Michele. Throughout Wayne’s lifetime, he was a foster father for over 6,000 children. He had a great love for children in need. A private memorial will be held on October 19, 2019 at 2:00 PM at Columbia Funeral Home in St. Helens, Oregon.

Wayne Joseph Michael Navolynski passed away August 9, 2019 at his home in Columbia City, Oregon at age 83, with his wife, Carol Navolynksi and her daughter, Mariah Flatt by his side. He was born in Longview, Washington on December 23, 1935... View Obituary & Service Information

The family of Wayne Joseph Michael Navolynski created this Life Tributes page to make it easy to share your memories.

Send flowers to the Navolynski family.