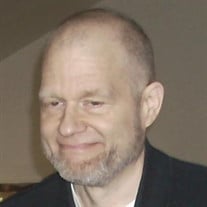 William (Bill) F. Johnson, age 60, lived in St. Helens, Oregon for 26 years and died on July 2, 2019 at Providence St. Vincent Medical Center. He was born on June 9, 1959 to the parents of Richard Melvin and Marie Annette (Cole) Johnson in Honolulu, Hawaii while his father was serving in the U.S. Navy. When he was 6 months old, his father went into the Coast Guard on the Oregon Coast. Bill loved the Oregon Coast during his childhood and had many happy memories with his sisters and brother. When Bill was about 9 years old, his parents divorced and his mom moved the children to Algona, Washington to temporarily live with her parents. They later moved to Lake Tapps when his mother married Gerald Richard Johnson. Bill attended 1st & 2nd grade in Toledo, Oregon. After moving to Washington, he attend Algona Grade School, Sumner Middle and High School and graduated from Sumner High in 1977. While attending Algona Grade School, Bill learned to play chess from his teacher and continue to challenge the teacher each day to play him. One day his teacher said, “He had created a chess monster in Bill”. Bill taught all his siblings, cousins, his children and friends who wanted to learn to play the game. During his life he had several challenging games of chess and loved every minute of the game. Upon graduating from high school, Bill attended Western Washington University in Bellingham, Washington for one year and then attended Multnomah School of the Bible (now Multnomah University) in 1978-1980. This is where he met his wife, Alice L. Smith. They were married on August 8, 1981 in Tumwater, Washington (the hottest day on record). He took his wife to Disneyland, California to share his fun adventures with her. They lived in Puyallup, Washington for a short time working at Pizza Hut and his family’s machine shop. He received a call from one of his friends saying they were hiring a security guard at Riedel International in Portland, Oregon. He worked at Riedel for 10 year as security guard/mailroom clerk. Bill worked a variety of jobs during his life as a driver for a delivery service (Portland), making and delivering pizza (Scappoose), millworker (Scappoose), manufacturing aluminum truck parts (Portland), cleaning office services (St Helens) and shipping/receiving manager for parking distributor (Vancouver, Washington) until he was disabled due to health issues in 2011. Bill and Alice have 2 married children, Nicholas D. (Jennifer) Johnson in El Cajon, California and Katherine D. (Jim) Browning in St Helens, Oregon. His other hobbies besides playing chess were playing board games, Risk and Monopoly, and going to movies and collecting DVD’s. He loved to share his knowledge of classic movies, for example; the year it was made, actors and actress who starred in it, if it was a remake and special effects done while making the movie. He loved going to the movies with others so they could share in the experience with him. He was a member of the Elks, St. Helens Lodge. He joined a writer’s club in St. Helens. He wrote several short stories which were published online for a short time. He has one published book which was being printed upon his death, The Third Triumvirate. He loved studying the scriptures and sharing his discoveries with others. He loved to debate with others and challenging them with another point of view. Survived by his wife, Alice L. (Smith) Johnson; son, Nicholas D. (Jennifer) Johnson; daughter, Katherine D. (Jim) Browning; mother-in-law, Dianne L. Smith; siblings, Lori Ann McKay, Anita McDonnell, Charlie Johnson, Connie Haugen; 3 nephews, 2 nieces, 3 uncles, 3 aunts and 16 cousins. Predeceased by his parents, Richard Melvin Johnson, father; Marie Annette (Cole) Johnson, mother; Gerald Richard Johnson, step father; Charles (Boppa) Robert Johnson, paternal grandfather; Lora (Mimi) Imogene (Phelps) Johnson, paternal grandmother; Lloyd James Cole, maternal grandfather; Mary Rosemma (Drake) Cole, maternal grandmother; Thor McKay, nephew, Howard Edward Smith, father-in-law; William Robert Johnson, and Charles Robert Johnson, paternal uncles. Celebration of Life will be held September 14, 2019 from 1:00 pm to 5:00 pm at the home of Alice Johnson, 384 N 9th Street, St Helens, Oregon. Donations can be sent to: Toys for Tots (Marine Corp) or your local Food Bank.

The family of William Farley Johnson created this Life Tributes page to make it easy to share your memories.

Send flowers to the Johnson family.