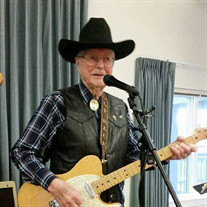 William Benjamin "Billy Mack" McAnnany April 23, 1923 ~ December 17, 2017 William McAnnany left for his heavenly home on December 17, 2017. He was lovingly surrounded by his family. His wings were ready, but our hearts were not. We will forever miss his sparkling Irish eyes, his sense of humor and the intensity of his love for his family and his Lord and Savior. Bill was born in Pitt, Minnesota on April 22, 1923. He was the youngest son of Edith (Flint) and Daniel McAnnany. He lived his early years in Pitt. When Bill was about 13 years old he scraped together $3 and bought himself a guitar. This began a love of music which would continue until the very end of his life. He taught himself to play guitar, accordion, harmonica, mandolin, piano and played trumpet in his high school band. He loved to sing, and entertaining people was natural for him. After finishing high school, he moved to Thief River Falls, Minnesota and there he met Marion Gladys Myrom. They were married on August 4, 1944. They soon became parents of three daughters, Pat, Carol and Judy and seven years later their son, Tim. In 1958, they moved to Detroit Lakes, Minnesota, where Bill continued working as a salesman for Peter's Meat Company and later Elliott Meats. In 1969, Bill and Marion decided they were tired of the snow and humidity and moved to St. Helens, Oregon. It was at this time that Bill formed a band called the Midnite Cowboys, and began to play music professionally. Marion died in 1977. In 1978 Bill married Nancy Sensenbach, and loved her children as if they were his own. After the death of his wife Nancy, Bill met Joyce Hooker of St. Helens. Joyce spent the last decade of Bill’s life by his side. Bill was a member of First Lutheran Church in St. Helens and loved the times he could fill his pew with family members. Even in his last years he collected the food that was donated to the Food Bank and delivered it to them. He was a longtime member of the Eagles, Elks and Moose fraternal organizations, holding various official positions within each. He was especially proud of receiving the “Governor’s Gavel Award” in 2001 and the “Moose of the Year” in 2009-2010. After his retirement as a meat cutter, along with his son Tim and other close friends, Bill joined the Ridgerunners Band and later became the leader. They enjoyed playing music for the St. Helens and Scappoose Senior Centers and various nursing homes in the area. Bill’s gift of music brought so much joy to him, and he loved sharing his gift with others. Preceding Bill in death were his wives Marion and Nancy, two of Nancy’s children, daughter Tamara Scott and son Jeff Sensenbach, granddaughter Vicky Jones, his parents and six siblings. He is survived by his daughters, Pat Storm (Harold), Carol Salvey (Steve) Judy Johnson (Mike) and son, Tim McAnnany (Cindy), Valerie and Alesia, and his much-loved grandchildren, great-grandchildren and great-great-grandchildren, along with his loving companion Joyce Hooker. The Memorial Service will be held at First Evangelical Lutheran Church 360 Wyeth St. St. Helens, Oregon on January 6, at 11:00 A.M. Memorials in his name may be sent to First Evangelical Lutheran Church or the St. Helens or Scappoose Senior Centers. Please sign our online guestbook at www.columbiafh.com.

William Benjamin "Billy Mack" McAnnany April 23, 1923 ~ December 17, 2017 William McAnnany left for his heavenly home on December 17, 2017. He was lovingly surrounded by his family. His wings were ready, but our hearts were not. We will... View Obituary & Service Information

The family of William Benjamin McAnnany created this Life Tributes page to make it easy to share your memories.

Send flowers to the McAnnany family.