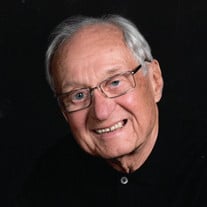 Wylie Jones Childs, 96 years old and resident of Scappoose, OR, died peacefully on 18 January, 2019. Born 25 February 1922 in Columbia, SC, son of Richard Austin and Reaux Jones Childs, his family moved to Flushing, in metropolitan New York City, where Wylie graduated from Bayside high school as president of his class. At Rensselaer Polytechnic Institute in Troy, NY, he earned bachelor (1943), masters (1945) and doctorate (1948) degrees in metallurgical engineering. His academic career began at Massachusetts Institute of Technology as a research metallurgist (1948) followed by appointment as professor and department head at Lafayette College, Easton PA (1949). In 1957 he returned to Rensselaer Polytechnic Institute as professor of metallurgical engineering and in 1959 was awarded a National Science Foundation fellowship at the University Birmingham, England. After concluding his academic career, Wylie moved to San Jose, CA as Principal Engineer, nuclear energy division, at General Electric (1976). In 1980, he joined the Electric Power Research Institute, in Palo Alto, CA, as Manager, Metallurgy and Welding Projects, until he retired in 1994. He served as Chairman of the Board for the Welding Research Council (1990 - 1993). A man of strong faith and prayer, Wylie married Bonnie June Carmin in 1983 at the Menlo Park Presbyterian Church where he served for thirty years as an active member, deacon and elder. Deeply loved by his family, Wylie is survived by his wife Bonnie Childs, his daughter Rebecca Fowler, his older brother Richard Austin Childs, nieces and nephews in the Midwest and East, and a large extended family nearby in Oregon, where he most recently lived, who will miss his warm smile and lively wit. The memorial service will be Saturday, 2 February, 10.30am, at Plymouth Presbyterian Church, St. Helens OR. Contributions in memory of Wylie Childs may be made to Plymouth Presbyterian Church.

The family of Wylie Jones Childs created this Life Tributes page to make it easy to share your memories.

Wylie Jones Childs, 96 years old and resident of Scappoose, OR,...

Send flowers to the Childs family.